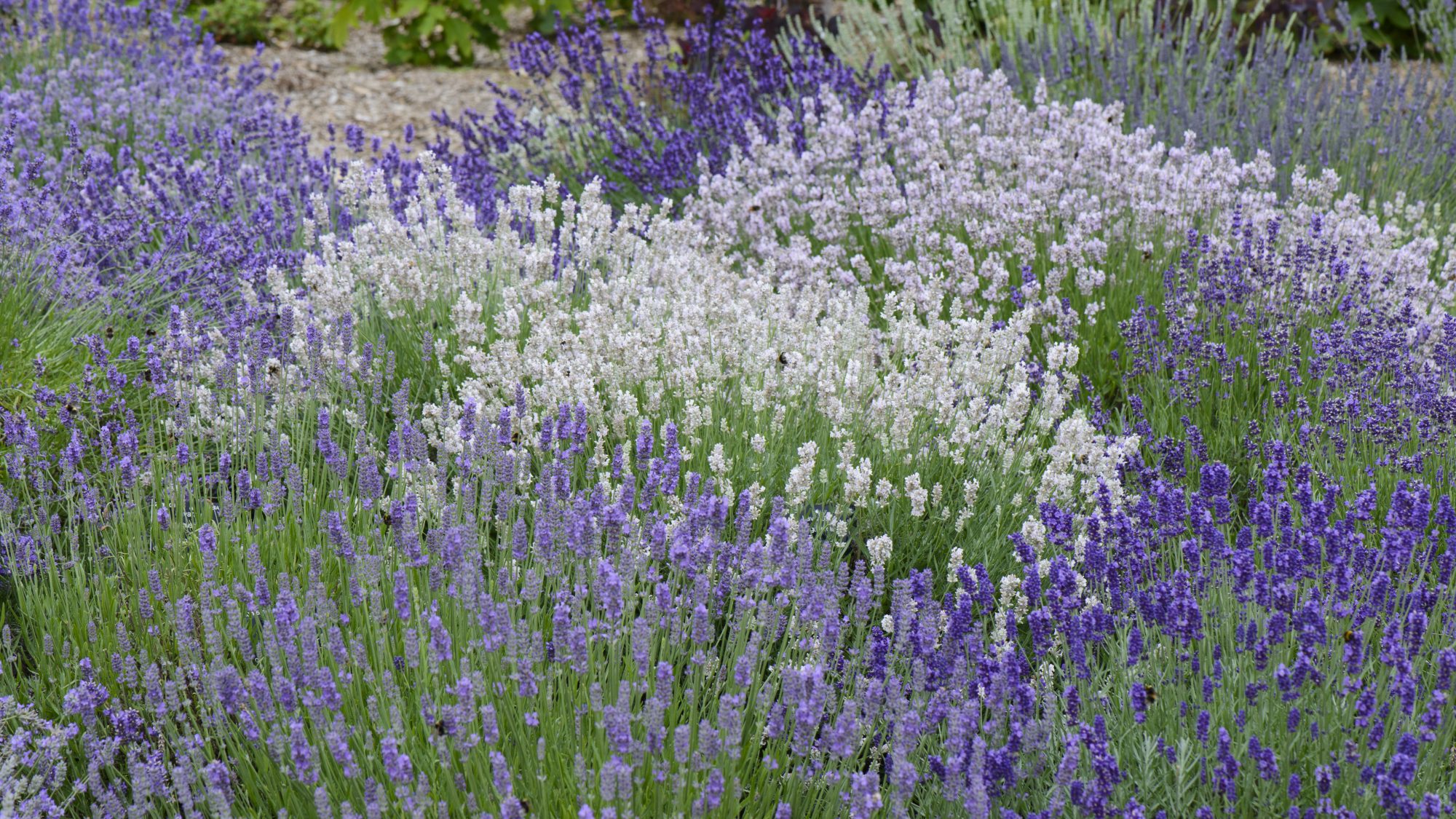 Lavenders are familiar garden plants but the collection we hold at the Garden illustrates the much wider diversity found within the genus Lavandula. Those lavenders most familiar to the British gardener come from southern Europe, although there are 39 species which are found from the Canary Islands, across the Mediterranean and North Africa to Arabia and India.

This research collection was built up by Dr Tim Upson, Curator at the Garden 1997-2014, to investigate the classification and evolution of lavenders. Representative species from the collection are planted out on the Research Plots. It was an important resource used to help write the definitive monograph of the genus, authored Dr Upson and Susyn Andrews in 2004.

The English Lavender, Lavandula angustifolia, is probably the most common garden lavender and since it is native to the mountains of southern Europe, it is perfectly hardy. It forms a dwarf shrub 40-60 cm high, flowering in June. Numerous colour forms have been selected ranging from dark violet-blue through to pinks and whites. The recent RHS trials awarded Awards of Garden Merit (AGM) to a range of cultivars, and is a good guide to the best lavenders for the garden. English Lavender produces a high quality oil used in the best perfumes, aromatherapy and cooking.

Nearly as common is Lavandin, L. x intermedia, a hybrid between L. angustifolia and another European species, L. latifolia, commonly known as Spike Lavender, which is rarely cultivated. Lavandin is a much larger plant reaching 80-100 cm, flowering later from mid-July. Again, many cultivars have been selected. A range of these are planted as an informal hedge around the Rose Garden. One of the most frequent seen in many domestic gardens is ‘Seal’ selected from a village near Hitchen in Hertfordshire and named after The Herb Farm at Seal in Kent. Of commercial importance is ‘Grosso’ which is the most widely-cultivated field cultivar but also an attractive garden plant. Perhaps the best performer in Cambridge is ‘Sussex’, its large flower spikes attracting a multitude of insects from bees to butterflies, at its best in high summer. Amongst the beneficial insects, however, is a new arrival – the attractive, green-striped Rosemary Beetle, that feeds on the flowers and foliage. This beetle from southern Europe has spread in the milder winters, and seems only to have reached Cambridge at the end of this decade.

Both of these lavenders enjoy the relatively dry conditions in Cambridge and our free-draining soil. A frequent question is when to prune, to which there are several answers! Best is to cut back the flowering shoots straight after flowering in late August which allows new shoots to clothe the plant and harden a little before autumn. However, we often leave the pruning until spring to allow the flowers to persist. The only important point is to ensure these lavenders are pruned annually which keeps them compact and stops them becoming leggy.

The other common garden lavenders are the French Lavenders, readily recognised by the colourful bracts or ‘bunny ears’ borne on the top of the flower spikes. These includes L. stoechas, which usually requires a very sheltered spot, and L. pedunculata, of which there are several geographic variants found in Spain, Portugal, and from Morocco to Turkey. Perhaps the most unusual is L. viridis, the Lemon Lavender from Spain and Portugal, which bears white flowers and green bracts and has powerfully-scented leaves. Some of these are planted in the warm sheltered borders around Brookside. Many of the French Lavenders now available in Garden Centres are actually hybrids of L. viridis, although they are often incorrectly named, and offer a very wide range of colour variants compared to the species. All these lavenders flower in spring and are best pruned after flowering.

Completely different in their general appearance with slender flower spikes and lobed leaves are those species from section Fabricia. These lavenders are tender and will not survive the winter outdoors so are currently planted out each summer in a bed on the western side of the Main Lawn. These lavenders are particularly diverse on the North Atlantic Islands with those from the Canary Islands being numerous. These include L. canariensis with bright green leaves and violet-blue flowers of which variants from different islands can be seen in the beds. Particularly attractive is L. minutolii from Gran Canaria with regularly lobed leaves, grey-green in colour. Perhaps the strangest is L. rotundifolia from the Cape Verde Islands with bright green irregularly lobed leaves and almost pinkish flowers. Most commonly available to the gardener is a hybrid between several of the Canary Island lavenders, L. x christiana, although it is often incorrectly sold as another species from Lanzarote, L. pinnata. A profuse flower ideal for pots, it makes a fantastic garden plant.

These tender Lavenders are also diverse in North Africa, particularly Morocco and several species are represented in the collection. Lavandula mairei comes from the arid Anti-Atlas and its scented leaves used to flavour the traditional mint tea. The almost leafless L. rejdalii is also from this area and was only named in 2002 in honour of Professor Mohammed Rejdali, a leading Moroccan botanist. Perhaps the most widespread species is L. coronopifolia or Stag’s Horn Lavender, whilst found in southern Morocco at the edge of the Sahara desert also occurs from the Cape Verde Island in the west through to Iran in the east.

From Somalia is L. aristibracteata, an attractive species naturally growing on cliffs. The species name refers to the long bristle-like bracts in the flower spike which can be readily seen. Contrasting in the smell of the leaves is the lemon scented, L. citriodora from Yemen and also from the same area, L. pubescens with a strong pungent smell.

The collection shows many more of the varied species and also the garden hybrids that have occurred, some of which are becoming common in gardens.