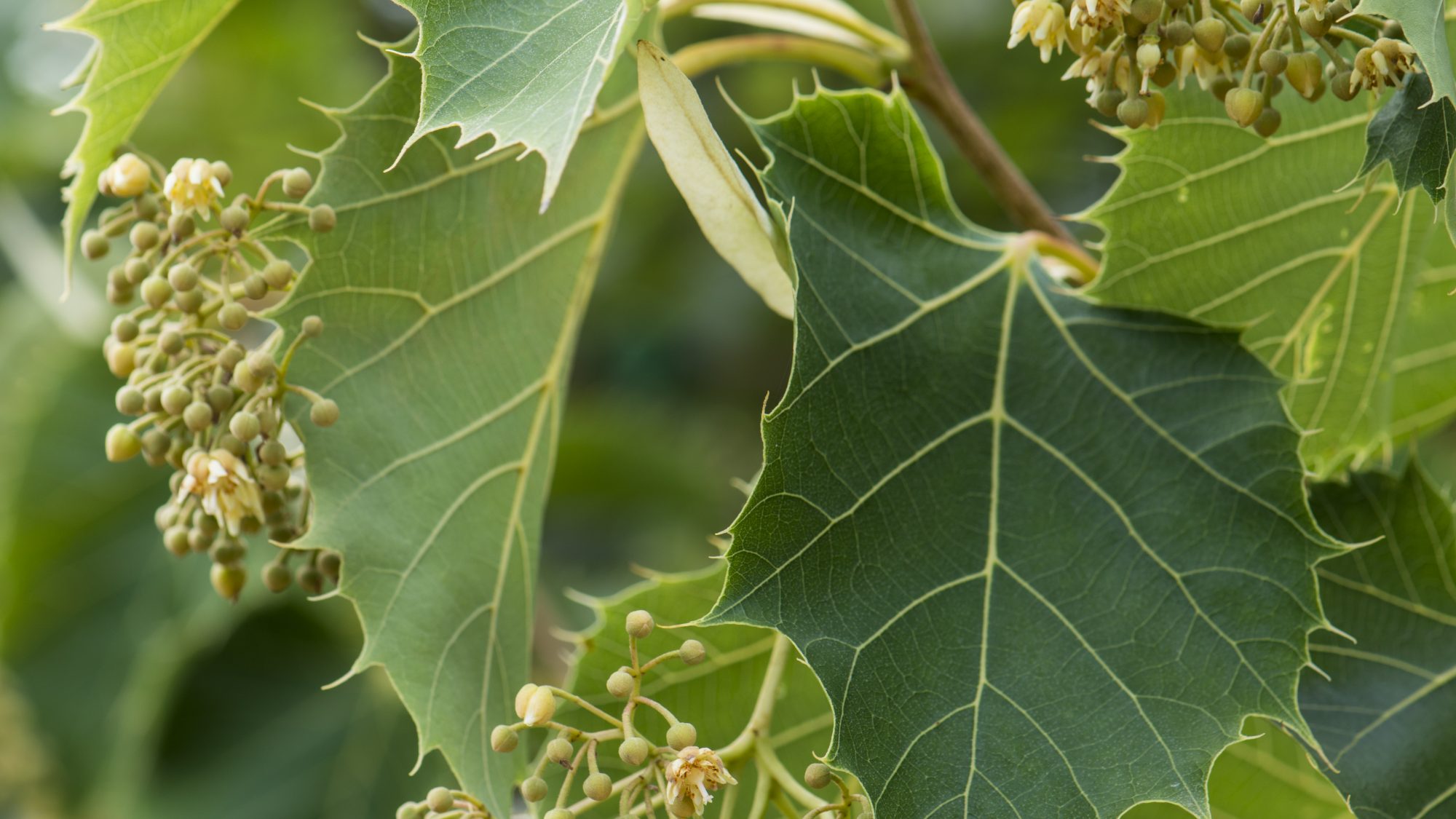 Limes have had a long association with the Botanic Garden. A Common Lime, Tilia x europaea, was chosen to mark the opening of the Botanic Garden in 1846, planted by the then Vice-Chancellor of the University, Reverend Ralph Tatham. It can still be found today just south of the Main Gate at the western end of the Main Walk. Its leaf has become the Garden’s logo. Limes were also the major research interest of Dr Donald Pigott (Garden Director, 1984-1995), who established a reference collection as part of his work on the genus.

Tilia is a genus of usually large trees found in temperate areas of Europe, Asia and North America. They are readily recognised by the flowers which have a large strap-like bract to which is attached the inflorescence of small, creamy-yellow scented flowers. Although well over a hundred species have been described, recent molecular studies and the work of Dr Pigott has shown many of these names merely represent variations between populations. A more accurate estimate is about 20-25 species, plus geographic variants and hybrids.

The collection is located in several areas of the Garden. As part of the original sequence of tree plantings in families, they can be found on the western boundary of the Garden, between the Systematic Beds and Hobson’s Conduit. The display here comprises many of the European species, including our common, native, small-leaved lime, Tilia cordata and the rarer large-leaved lime, T. platyphyllos. These two species have crossed to give the Common Lime, Tilia x europaea, widely planted in avenues and as street trees. It is well-known for the mass of suckers characteristically produced from the base. All of these species have leaves which appear green on the underside and lack hairs or, if present, arise as tufts borne between the leaf veins. These limes can make medium to large trees. A smaller alternative from Asia is the Mongolian Lime, T. mongolica, which has a rounded habit, ivy-shaped leaves, 3- to 5- lobed leaves, which are coarsely toothed and turn bright yellow in autumn.

Another group of limes differ in that the underside of the leaf is covered with hairs, often making them appear silvery beneath. A good example is the Silver Lime, Tilia tomentosa, from south east and central Europe. There is a handsome example close to the Main Gate; it is particularly attractive when the wind rustles the leaves, revealing the silvery undersides. In full flower, the rich scent saturates the summer air.

Some of the most interesting and unusual limes where introduced to the collection by Dr Pigott. Two of the most spectacular can be found in the Humphrey Gilbert-Carter area. Tilia endochrysea comes from south-eastern China, and the fossil record suggests it is one of the oldest [Tilia] species still alive today. The leaves are a beautiful bright crimson when they break in spring, fading to pink and then green as they expand. Closeby is T. nobilis, also from China, known for its large flowers borne in profusion, suspended on long stalks adorned with ribbon-like, fluttering bracts. Another spectacular Chinese species is Tilia henryana, with its bristle-like teeth crimping the edge of the leaves, perhaps most spectacular when outlined in the filigree of autumn frosts. Trees are grown close to the Main Gate and on the south side of the South Walk, near the Gilbert-Carter area. This species will also be planted on the new Garden Cafe area and pruned to become spreading parasols to provide summer shade.

The research work on Tilia by Dr Pigott is expected to be published as a monograph on the genus in the near future.