The Caucasian Alder is native to the Caucasus Mountains, but it clearly enjoys our Cambridge climate. It now towers over the Birch collection, measuring a mighty 17.5m, making it one of our Champion Trees. Attractive, crumbly-textured, slender male catkins appear exceptionally early in autumn.

The Birch family (Betulaceae) comprises around 170 species. All of them bear fruit botanically described as nuts, with the Common Hazel (Corylus avellana) and the Filbert (C. maxima) being notable orchard plants. Other genera include several ornamental trees, including many with striking bark, such as the Paper Birch (Betula papyrifera).

The Hop-Hornbeam (Ostrya carpinifolia) is a ‘Tertiary’ tree: native to Britain before the last ice age but which, unlike Beech and Oak, was not able to recolonise the country before it was cut off from mainland Europe when sea levels rose. There is a fine Hop-Hornbeam at the junction of Middle Walk and Bateson Walk. 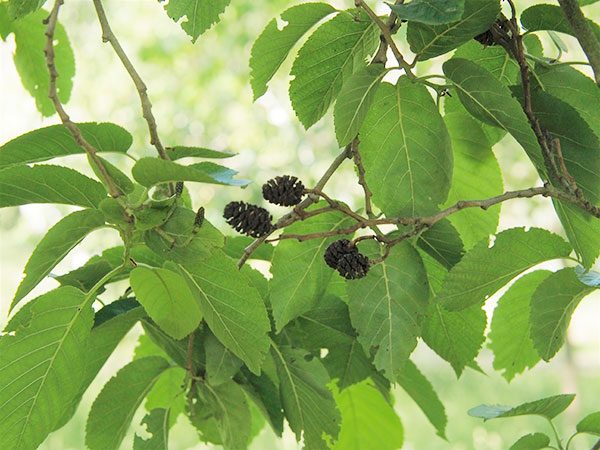