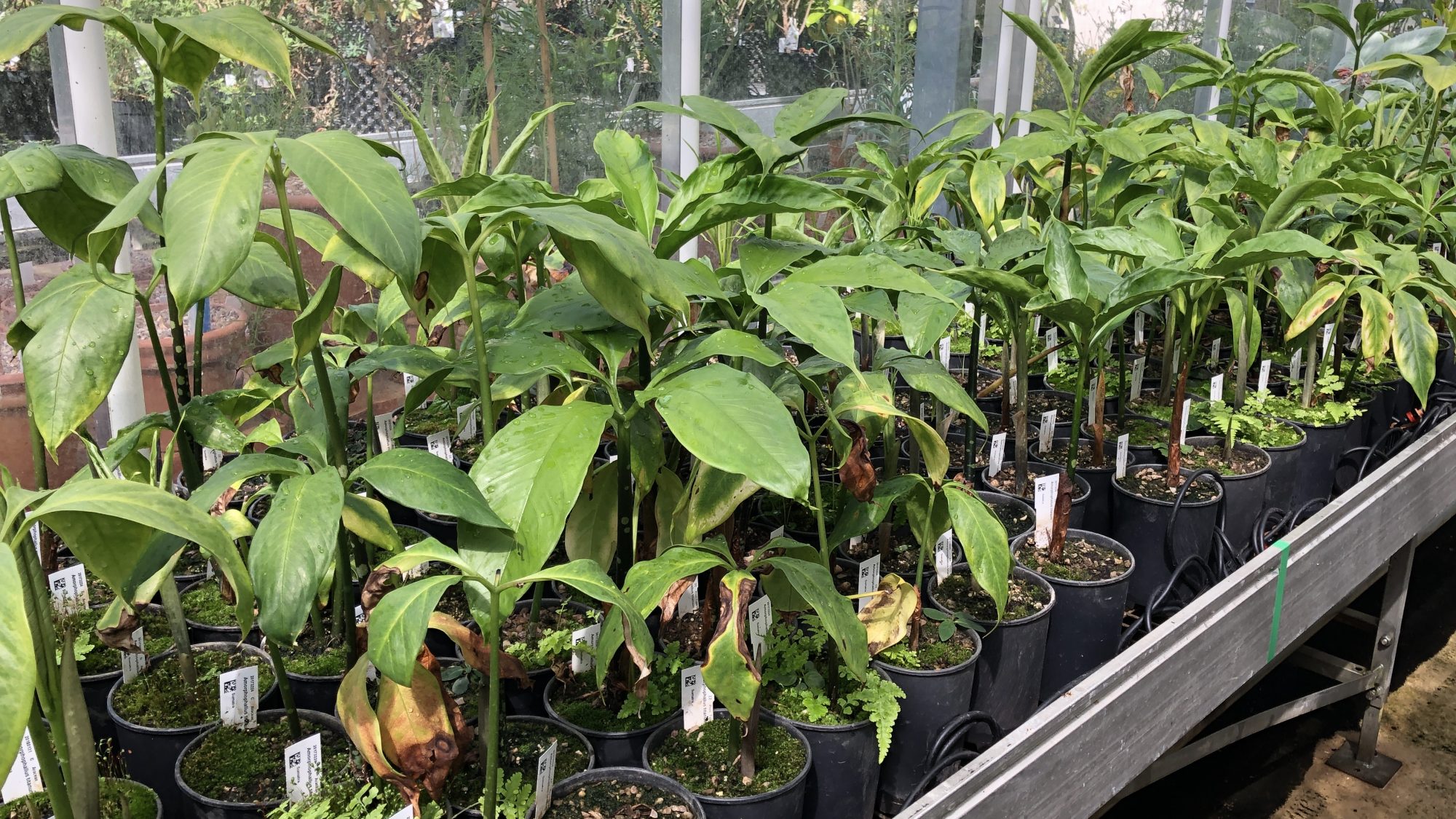 Cambridge University Botanic Garden (CUBG) has successfully raised 160 ‘baby titans’ from the 2017 flowering of its titan arum Amorphophallus titanum plant ‘Titus’. This is believed to be the first time such a large number of plants have been successfully raised in cultivation in the UK.

We’re extremely excited to announce that we have 160 baby titans and we believe this may be the largest number of plants that have ever been successfully raised in cultivation.

Native to Indonesia, titan arum plants are now categorised as Endangered by the International Union for Conservation of Nature (IUCN) Red List of Threatened Plants, due to habitat loss. They flower infrequently and when they do, the flower and its pungent smell only last for around two days, as the stench it produces is the plant’s mechanism to lure pollinators in the wild.

Botanic gardens play an important role in maintaining a viable population of this extraordinary species outside its rainforest home in Sumatra, as its seed will not survive being stored. In cultivation, the plant has to be hand pollinated with pollen from a different individual as the titan arum cannot self-pollinate.

Until now, there have probably only been around 20 successful fruitings of these plants in cultivation worldwide. CUBG used the 2017 flowering of our titan arum to discover more about successfully pollinating the plant by experimenting with two different types of pollen – fresh and frozen -and recorded the results, which we are now sharing with other botanic gardens.

CUBG Glasshouse Supervisor Alex Summers explains: “We’re very excited to announce that we’ve successfully reached the stage of having 160 small titan arum plants. This is a result of us experimenting with using different pollen; waiting to see if fruit was set; extracting and sowing seeds fresh from the fruit and then nurturing the seedlings through their first dormancy period – which is the trickiest part of the whole process.”

This whole process has taken almost two years as ‘Titus’ flowered in June 2017. On the first night of opening, Alex used fresh pollen sent from the Eden Project and frozen pollen from the Royal Botanic Garden Edinburgh to pollinate ‘Titus’.

Alex explains: “We partitioned the flower structure so we knew which pollen came from which source, so when it came to producing its fruits, we could record where the pollen came from and whether there was any difference in success rates from using fresh and frozen pollen. What was interesting to discover was that fruit with viable seed failed to set from the frozen pollen, but we did get fruit from fresh pollen. This process has shown us that freezing pollen probably kills it, and that fresh pollen should be used for fruiting success.”

As titan arums do not self-pollinate, botanic gardens rely on collaborating with each other for pollination and subsequent fruiting to happen. As the flowerings are so infrequent – around every 3-8 years in cultivation – everything has to be aligned for success.

CUBG’s titan arum set fruit five months after pollination. The red fruits contained one to two seeds each which had to be sown fresh for successful germination.

Alex continues: “Germination of the seeds is quite straight forward but only if the seed is fresh. We were fortunate enough to have 190 seeds to sow; of these 180 germinated. However, the most difficult part is successfully getting the seedlings through their first dormancy period – you can lose up to 90% of your plants at this stage.”

The general consensus among botanic gardens is that titan arum tubers must be kept moist throughout their growing cycle, unlike other related species in the genus. CUBG grew the young seedlings in a loam-based mix and allowed them to almost dry during their dormancy (when growth is temporarily stopped), which coincided with winter. In spring, the pots were flood watered and this initiated a return to growth. As the tubers get larger, we will not allow them to dry so readily.

Alex says: “We’re extremely excited to announce that we have 160 baby titans and we believe this may be the largest number of plants that have ever been successfully raised in cultivation. The key to the success has been keeping the dormant plants on the drier side, which may seem obvious, but is not the case for the mature tubers.”

The small plants now each have a potato size tuber which will need to weigh at least 15kg in order to bloom. Alex and his team are now setting them on a trajectory to their flowering stage. He is following advice from colleagues at Royal Botanic Gardens, Kew and using a feed high in phosphorus to build the tuber quickly and aim to get to the flowering stage as quickly as possible. He anticipates this should take between five to eight years.

Alex says: “The plants will now go through more dormancies which will get longer lasting, around 6-9 months, and between dormancies they’ll send up a leaf which will stand for around 18 months. We’ll feed them as much as we can during this stage.”

Alex and his team are constantly recording all their work to get more information for a timeline to demonstrate how quickly the plants will bulk up their tubers and get to the flowering stage.

Not all the young plants will remain at the Garden. They will be distributed to other botanic gardens in the UK and around the world in the hope that the story of this plant and its endangered status in the wild can be shared.

“We will hold onto a reasonable number of plants so we can hopefully hold some major flowering events with several flowerings at the same time and demonstrate a live pollination so people can see what we’re doing and see the process,” says Alex.

As each plant will be genetically different, the plants are not expected to flower at the same time. However this also needs to be scientifically proven, so the Garden has sent genetic material from the plants to colleagues at Chicago Botanic Garden, who are extracting leaf DNA to assess their genetic diversity.

Exchanging information of this kind with other botanic gardens will enable us and botanic garden colleagues around the world to develop techniques to increase populations of cultivated plants and conserve this species in the future.

CUBG’s Head of Horticulture, Sally Petitt says: “This has been an exciting process for us, not only to flower a titan arum, but importantly to develop our knowledge and understanding of the requirements of this species, and particularly it’s pollination, germination and successful cultivation. Only by monitoring and recording each stage of cultivation can we fully understand how to grow and increase numbers of this threatened plant. Exchanging information of this kind with other botanic gardens will enable us and colleagues around the world to develop techniques to increase populations of cultivated plants and conserve this species in the future.

“It’s great that we’ve honed these techniques here, and are now in possession of 160 young titan arums, and can share our observations and techniques with other institutions, including RBGE which has a titan arum about to flower.  We hope that in a few months time our young plants will have titan cousins in Edinburgh, thanks to a donation of fresh pollen from The Eden Project, and also thanks to careful observation and recording here at CUBG”.

Hear more from Alex Summers in the clip below as he explains how we’ve successfully raised 160 baby titan arum plants. 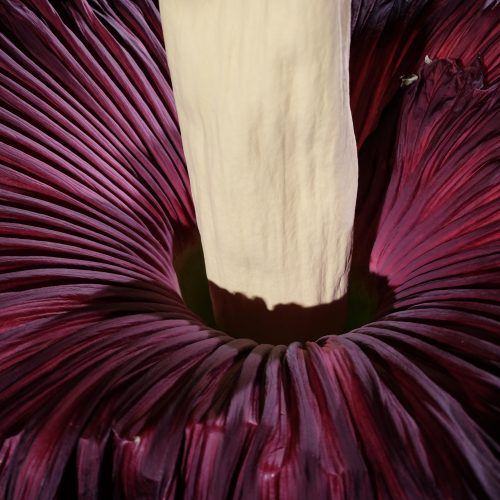 See below for Titan's Vital Statistics and the time lapse footage taken over 8 days between 19-26 June 2017. 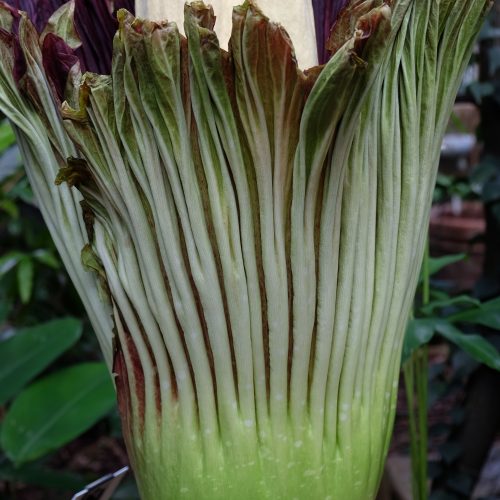 A short film about the flowering and pollination of Titus, the Titan Arum

Watch the story of 'Titus' as told by Alex Summers, our Glasshouse Supervisor, responsible for nurturing Titus. July 2017 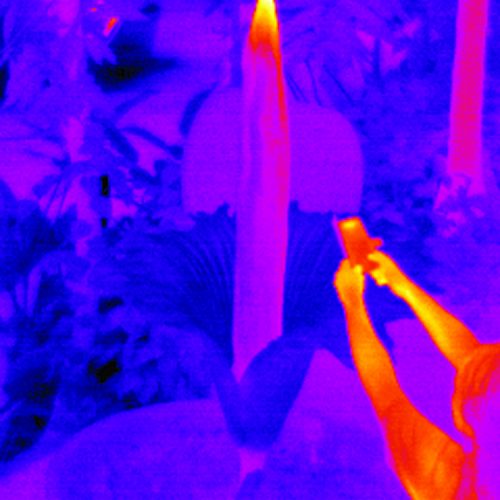 'Tiny' the titan arum heats up