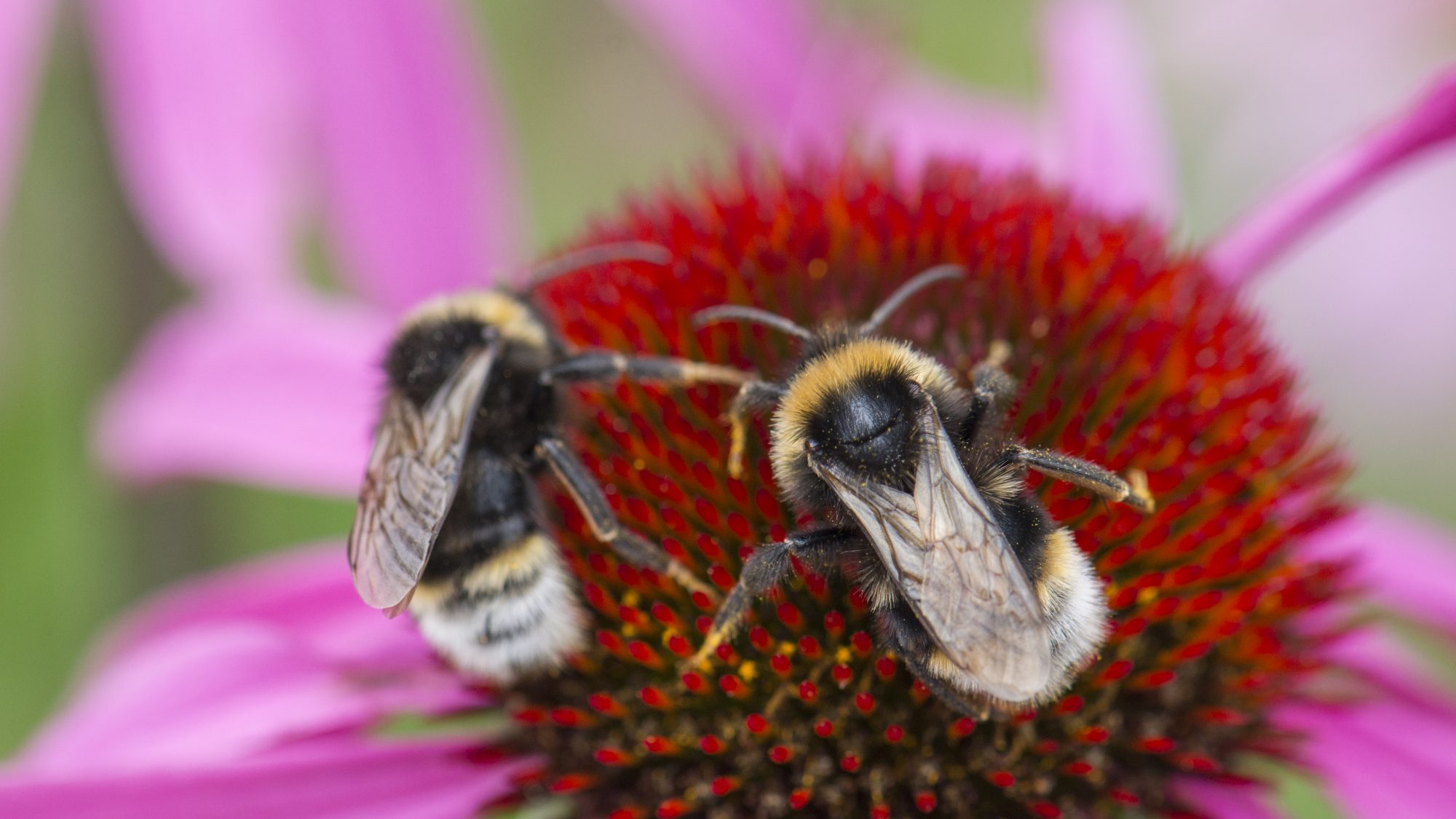 The study of the bee-manipulating cucumber mosaic virus reveals a “short-circuiting” of natural selection. Researchers suggest that replicating the scent caused by the infection could encourage declining bee populations to pollinate crops – helping both bee and human food supplies.

Plant scientists at the University of Cambridge created a bumblebee flight arena in one of the Garden’s experimental glasshouse bays to facilitate their research and have found that the cucumber mosaic virus (CMV) alters gene expression in the tomato plants it infects, causing changes to air-borne chemicals – the scent – emitted by the plants. Bees can smell these subtle changes, and glasshouse experiments have shown that bumblebees prefer infected plants over healthy ones.

Scientists say that by indirectly manipulating bee behaviour to improve pollination of infected plants by changing their scent, the virus is effectively paying its host back. This may also benefit the virus: helping to spread the pollen of plants susceptible to infection and, in doing so, inhibiting the chance of virus-resistant plant strains emerging.

The authors of the new study, published in the journal PLOS Pathogens, say that understanding the smells that attract bees, and reproducing these artificially by using similar chemical blends, may enable growers to protect or even enhance yields of bee-pollinated crops.

“Bees provide a vital pollination service in the production of three-quarters of the world’s food crops. With their numbers in rapid decline, scientists have been searching for ways to harness pollinator power to boost agricultural yields,” said study principal investigator Dr John Carr, Head of Cambridge’s Virology and Molecular Plant Pathology group.

“Better understanding the natural chemicals that attract bees could provide ways of enhancing pollination, and attracting bees to good sources of pollen and nectar – which they need for survival,” Carr said.

He conducted the study with Professor Beverley Glover, Director of Cambridge University Botanic Garden, where many of the experiments took place, and collaborators at Rothamsted Research.

CMV is transmitted by aphids – bees don’t carry the virus. It’s one of the most prevalent pathogens affecting tomato plants, resulting in small plants with poor-tasting fruits that can cause serious losses to cultivated crops.

Not only is CMV one of the most damaging viruses for horticultural crops, but it also persists in wild plant populations, and Carr says the new findings may explain why:

“We were surprised that bees liked the smell of the plants infected with the virus – it made no sense. You’d think the pollinators would prefer a healthy plant. However, modelling suggested that if pollinators were biased towards diseased plants in the wild, this could short-circuit natural selection for disease resistance,” he said.

“The virus is rewarding disease-susceptible plants, and at the same time producing new hosts it can infect to prevent itself from going extinct. An example, perhaps, of what’s known as symbiotic mutualism.”

The increased pollination from bees may also compensate for a decreased yield of seeds in the smaller fruits of virus-infected plants, say the scientists.

The findings also reveal a new level of complexity in the evolutionary ‘arms race’ between plants and viruses, in which it is classically believed that plants continually evolve new forms of disease-resistance while viruses evolve new ways to evade it.

“We would expect the plants susceptible to disease to suffer, but in making them more attractive to pollinators the virus gives these plants an advantage. Our results suggest that the picture of a plant-pathogen arms race is more complex than previously thought, and in some cases we should think of viruses in a more positive way,” said Carr.

Plants emit ‘volatiles’, air-borne organic chemical compounds involved in scent, to attract pollinators and repulse plant-eating animals and microbes. Humans have used them for thousands of years as perfumes and spices.

The researchers grew plants in individual containers, and collected air with emissions from CMV-infected plants, as well as ‘mock-infected’ control plants. Through mass spectrometry, researchers could see the change in emissions induced by the virus. They also found that bumblebees could smell the changes. Released one by one in the small ‘flight arena’ in the Garden, and timed with a stopwatch by researchers, the bees consistently headed to the infected plants first, and spent longer at those plants.

“Bees are far more sensitive to the blends of volatiles emitted by plants and can detect very subtle differences in the mix of chemicals. In fact, they can even be trained to detect traces of chemicals emitted by synthetic substances, including explosives and drugs,” said Carr.

Analysis revealed that the virus produces a factor called 2b, which reprograms genetic expression in the tomato plants and causes the change in scent.

Mathematical modelling by plant disease epidemiologist Dr Nik Cunniffe, also in the Department of Plant Sciences at Cambridge, explored how the experimental findings apply outside the glasshouse. The model showed how pollinator bias for infected plants can cause genes for disease-susceptibility to persist in plant populations over extremely large numbers of generations.

The latest study is the culmination of work spanning almost eight years (and multiple bee stings). The findings will form the basis of a new collaboration with the Royal Horticultural Society, in which they aim to increase pollinator services for cultivated crops.

With the global population estimated to reach nine billion people by 2050, producing enough food will be one of this century’s greatest challenges. Carr, Glover and Cunniffe are all members of the Cambridge Global Food Security Initiative at Cambridge, which is involved in addressing the issues surrounding food security at local, national and international scales.

Beverley Glover added: “It’s really exciting to see that interactions between plants, pollinators and plant viruses can lead to these unexpected evolutionary outcomes, and I’m really looking forward to exploring how common this sort of evolutionary payback is. This work is a great example of how the Botanic Garden’s facilities and horticultural expertise can lead to some really surprising scientific discoveries”.

The use of state-of-the-art experimental glasshouses at Cambridge Botanic Garden, and equipment at Cambridge and Rothamsted, was funded by the Leverhulme Trust.