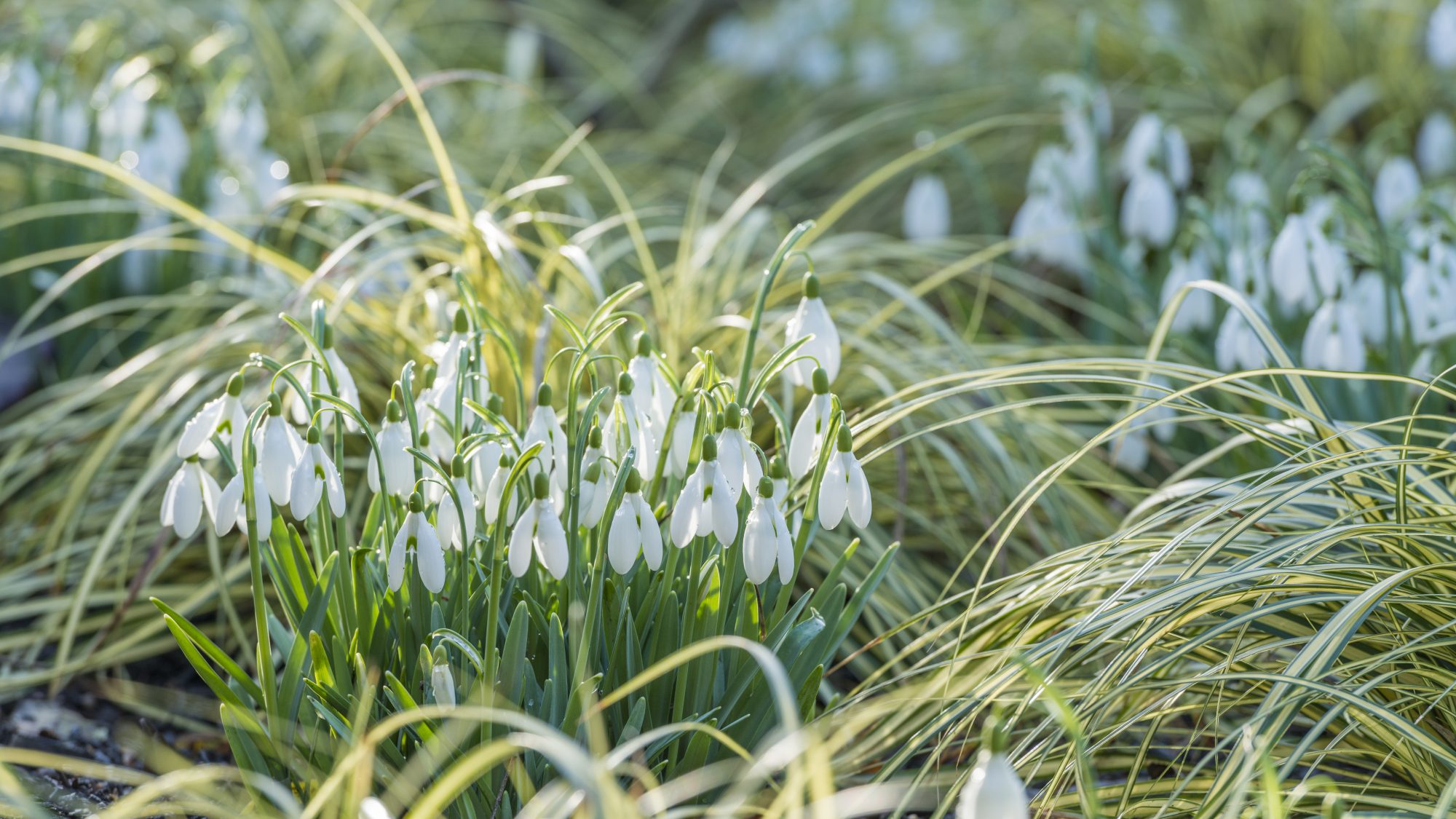 A guide to snowdrops at CUBG

For the past 10 years, our Demonstration and Display team, headed up by Pete Kerley, have been on a snowdrop crusade – to spread a carpet of snowdrops around the Garden so visitors can follow an almost continuous white trail from Garden gate to gate.

Galanthus – the Latin name for snowdrop – comes from the Greek ‘gala’ meaning milk and ‘anthos’ meaning flower. Typical snowdrop flowers are white, made up of six petal-like segments known as tepals – three larger, outer ones and three smaller, inner ones. The inner petals have a little notch at the tip and a green inverted V marking above it.

There are about 20 species of snowdrops and the three most common are Galanthus nivalis (nivalis meaning snow); G. elwesii and G. plicatus; many hybrid snowdrops have arisen from these species. Identifying the species comes from examination of the leaf. The elwesii species has a supervolute or rounded leaf base, while plicatus leaves are plicate having a folded ‘lip’ along the edge; nivalis leaves are applanate or flattish at the base.

Starting at the Station Road Gate, why not spend some time following Pete’s path and spot the different varieties of snowdrops on your way?

Station Road: Spreading along from the Station Road Gate, visitors are greeted by Galanthus ‘S. Arnott’. It has a large flower and a slight scent on a warm day. Another snowdrop with lots of impact is Galanthus ‘Magnet’ – one of Pete’s favourites. This variety bulks up quickly and has an unusually long, slender, arching stalk or ‘pedicel’ – a great snowdrop to spot by its flower ‘bobbing’ around and moving in the wind and by its inner tepals having a prominent green V shaped mark.

Heading further along the path from the Station Road Gate is the dainty double snowdrop Galanthus nivalis ‘Flore Pleno’ whose name means ‘double flower’. It has three outer tepals and a mass of inner ones. Another variety which grows throughout the Garden is Galanthus ‘James Backhouse’. If you look carefully, you’ll recognise this variety by spotting one malformed flower in each clump – with an extra outer and often deformed tepal.

Winter Garden: The common snowdrop Galanthus nivalis can be seen throughout the Winter Garden effectively combined with the white bramble, Rubus ‘Golden Vale’ as well as other snowdrop varieties already mentioned.

Looping back and heading towards the Autumn Garden, snowdrops form white underskirts under some trees. Keep an eye out for Galanthus nivalis ‘Scharlockii’ with its distinguishing feature – its long green spathe is split into two giving the snowdrop its nickname of ‘donkey’s ears’. Another distinguishing feature are the green markings on the tips of its outer tepals.

Another snowdrop seen throughout the Garden is Galanthus x valentinei. This is a nivalis/plicatus hybrid and grows well here in the Garden.

Cory Lawn Borders: Walking along the Cory Lawn borders, past the Café are plenty of ‘bobbing’ heads of G. Magnet. The displays can then be picked up again in the Peony Border running in front of the Schools’ Garden. Here are some more choice cultivars which are planted in smaller groups: Galanthus nivalis ‘Viridapice’ which is distinguished by its shorter spathe and green on the tips of its outer tepals; Galanthus plicatus ‘Wendy’s Gold’ has yellowy foliage with inner pretty gold features reminiscent of a tiny narcissus flower. Galanthus ‘Kite’ has extremely long, white, outer tepals and is a much larger looking snowdrop. In contrast is the more delicate G. nivalis ‘Anglesey Abbey’ with very green foliage and very delicate, diminutive flowers.

Woodland: Moving onto the Woodland, you’ll discover drifts of G. woronowii – another delicate, and small growing species, which can be found growing alongside G. ‘Flore Pleno’, G. ‘Magnet’ and G. ‘Anglesey Abbey’ before heading towards the Brookside Gate.

Brookside Gate: Here the favourites G. ‘Magnet’ (with the bobbing head), G. ‘S. Arnott’ (with the large clumps and flower for impact); G. woronowii (a shorter snowdrop with broader, green leaves) and G. ‘James Backhouse’ combine to create a spectacular finale. Finally, nestled next to the Brookside Gate and Hobson’s Conduit is the appropriately planted G. ‘Hobson’s Choice’ – another strong cultivar with a tall stem and big flower to bid you farewell.