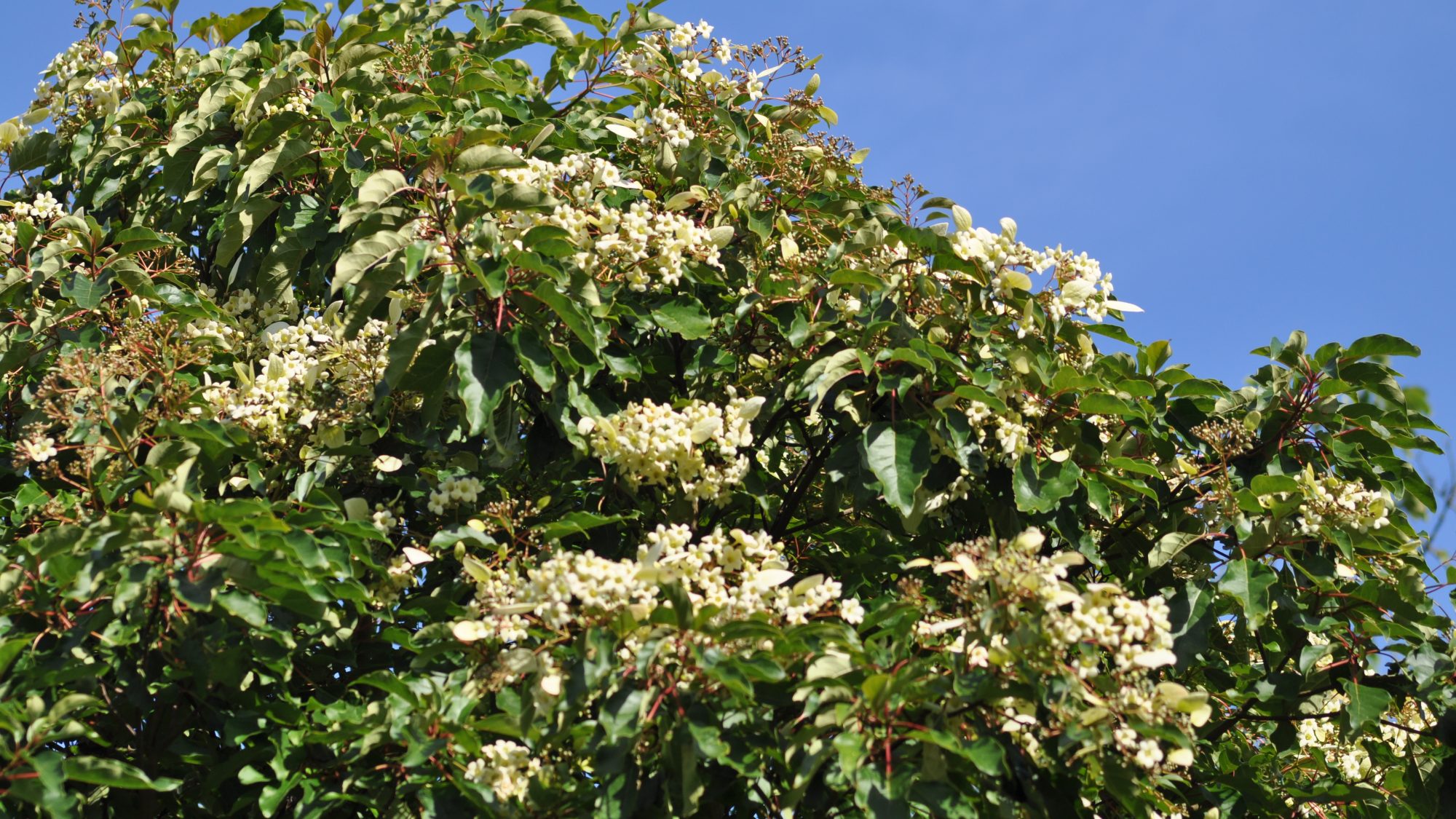 Emmenopterys henryi, a deciduous tree that is rarely found in cultivation has shown some signs of flowering.

This is due to the exceptionally cold winter followed by one of the hottest summers on record. This is only its second time to flower at CUBG, having taken 30 years to first ever flower in 2012 from planting in 1982.

As the tree flowers so rarely, the Garden’s curating team have taken the opportunity to remove the first flowers to verify the name of the species, take close-up images and to create a herbarium specimen from it to be used for science and plant classification purposes. At the moment, no other buds are currently showing and staff are waiting to see if more flowers will follow as they did in 2012.

Sally Petitt, Head of Horticulture at CUBG says: “Our tree flowered for the first time in 30 years back in 2012. Nobody is really sure why it flowers so infrequently, but it is likely to be weather related, and it appears to enjoy periods of winter cold. Flowerings are likely to be in response to the weather. Before the last flowering here in 2012, there had been a winter where temperatures had dropped to -13°C as well as a winter and spring drought with relatively high spring and summer temperatures. This year we had a prolonged cold and wet winter with 23 occurrences of temperatures below -5°C in February and March, with the lowest -10°C, and this may explain the current flowering – although at the moment this has been limited to only just one branch at the top of the canopy which we’ve now removed for scientific study before the flowers fade.”

Native to central and south-western China, and described by the great Edwardian plant hunter EH Wilson as “one of the most strikingly beautiful trees of Chinese forests”,
the CUBG Emmenopterys henryi is one of only a handful of trees to have flowered since they were introduced in Britain in 1907.

Emmenopterys henryi is seen as a collectors’ tree, with few grown in collections. It was introduced into the UK by botanist Ernest Wilson in 1907 and named after the Irish plant hunter, Augustine Henry, who first discovered the tree in central China in 1887. The tree in the Garden came from Kew in 1982, having been micropropagated from the original Wilson collection of 1907. The name ‘Emmenopterys’ means ‘lasting wing’, and is given in reference to the white bracts that act as sails during seed dispersal, and ‘henryi’ honours Augustine Henry who collected the first specimens of this plant in the 1887.

The first recorded flowering in the UK was at Wakehurst Place, Sussex in 1987, but it was another 23 years before it flowered again in 2010. This and other trees have flowered since at Borde Hill, Marwood House and here in Cambridge.

The flowers arise in clusters, each one star-shaped, fragrant and surrounded by large, white elliptic bracts that flutter in the slightest breeze.

“The flowers look spectacular when they are in full bloom. We are not sure whether the whole tree will flower as it did in 2012, although in its previous flowering a succession of flowers were produced, starting from the top of the tree. We really do get excited about something so rare and we’re in touch with the other gardens in the country to hear if and how theirs are flowering. This isn’t from a competitive point of view – it’s about sharing information as we’re intrigued with the science behind it all and the fact that nature never ceases to surprise us.”

We really do get excited about something so rare and we’re in touch with the other gardens in the country to hear if and how theirs are flowering.

The Garden’s specimen grows in the Gilbert-Carter area which is between the Fountain and South Walk. It can be seen from the South Walk just behind the Forsythia beds and is around 8.5m in height.

At its first flowering in the Garden in 2012, CUBG invited members of the public to give this species a common name. The winning name ‘Man Yang tree’ was suggested by the great, great nephew of Augustine Henry – Peter Phillips (then aged 12). Peter explained that Man Yang was the favourite Chinese plant collector of his great, great uncle Augustine who first introduced this species to science.

In the wild Emmenopterys henryi is threatened by habitat destruction for agriculture and forestry and there it will flower from June, but in cultivation it tends to flower between July and September.

Emmenopterys henryi belongs to the coffee family, Rubiaceae. The Rubiaceae is a large family which is more diverse in warmer climates than in our own temperate conditions. Aside from the nation’s second favourite drink, coffee, the best known members of the family are the herbaceous bedstraws (Galium spp.) including the scourge of many gardens, Galium aparine, commonly known as cleavers or goose grass.