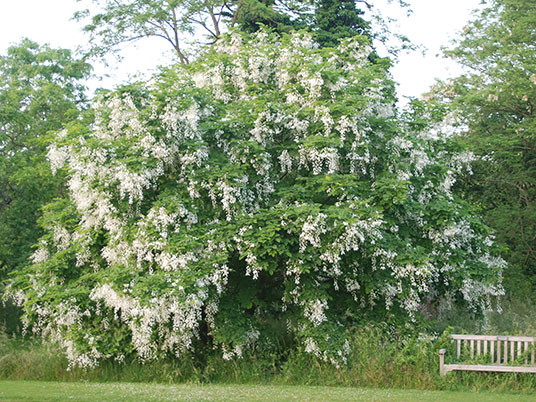 The Kentucky Yellowwood has leaves made up of many leaflets, creating a dense cover against which the long racemes of Wisteria-like, fragrant white flowers flutter in the lightest breeze. Flowering is most profuse after hot, dry summers. In the autumn, the foliage turns yellow, gold, and orange.

The Pea and Bean family (Fabaceae) is large, comprising around 19,000 species (approximately 7% of all flowering plant species). Many of them are agriculturally important, including Soybean (Glycine max, of which around 350m tonnes is produced every year, 70% of which is used as animal feed), Pea (Pisum sativum), Chickpea (Cicer arietinum) and Peanut (Arachis hypogaea).

Many plants in Fabaceae have specialised structures called ‘root nodules’ which host bacteria called ‘rhizobia’. The bacteria take nitrogen gas and convert (or ‘fix’) it to a form which is usable by the host plant – in effect, providing fertilizer. In return, the plant provides the bacteria with organic acids as a carbon and energy source.