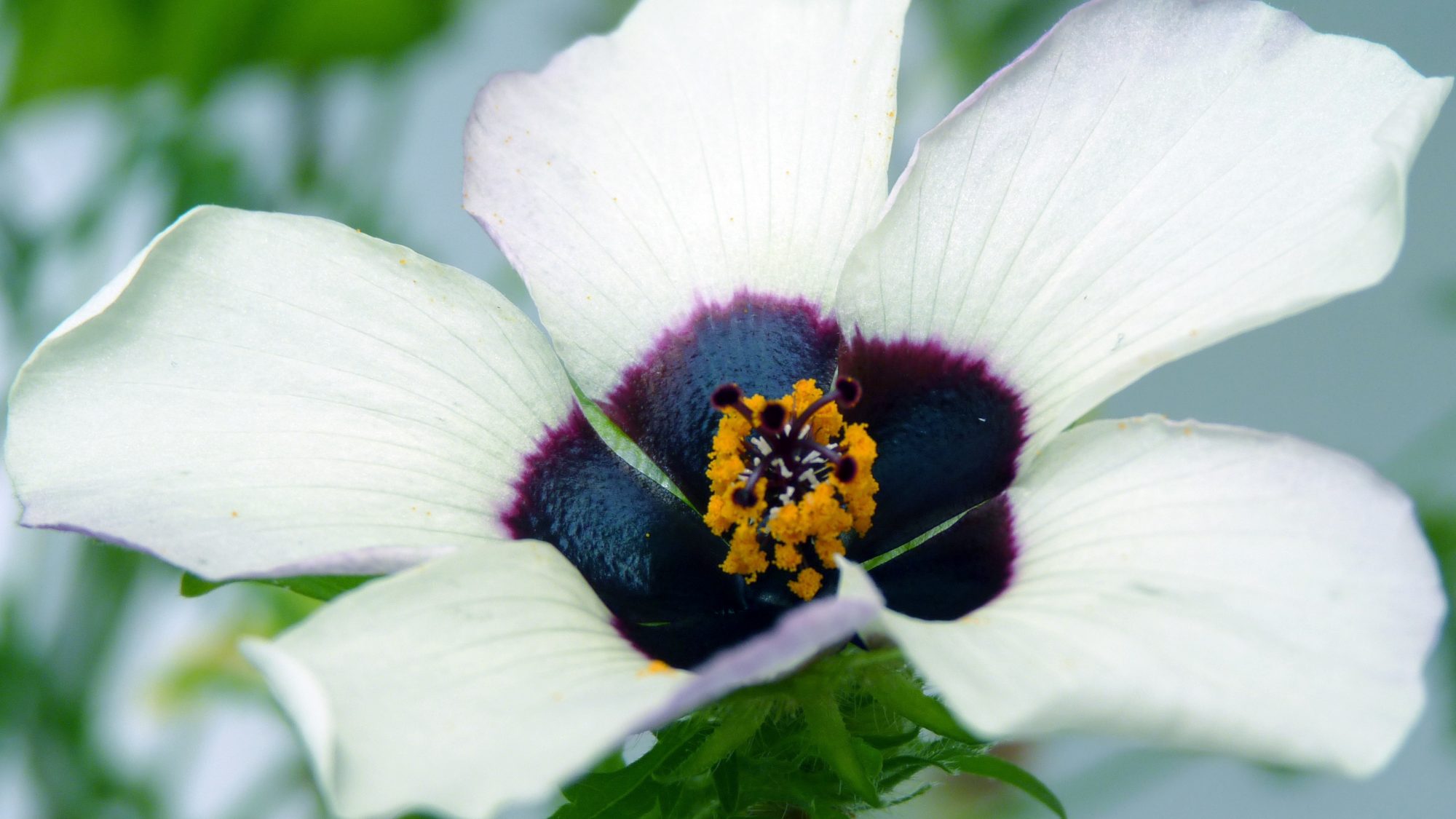 New study published in the journal Nature finds “messy” microscopic structures on petals of some flowers manipulate light to produce a blue colour effect that is easily seen by bee pollinators.

Latest research using plants from Cambridge University Botanic Garden’s plant collection has found that several common flower species have nanoscale ridges on the surface of their petals that meddle with light when viewed from certain angles.

These nanostructures scatter light particles in the blue to ultraviolet colour spectrum, generating a subtle effect that scientists have christened the ‘blue halo’.

By manufacturing artificial surfaces that replicated ‘blue halos’, scientists, led by the Botanic Garden’s Director, Professor Beverley Glover, were able to test the effect on pollinators, in this case foraging bumblebees. They found that bees can see the blue halo, and use it as a signal to locate flowers more efficiently.

While the ridges and grooves on a petal surface line up next to each other “like a packet of dry spaghetti”, when analysing different flower species the researchers discovered they vary greatly in height, width and spacing – yet all produce a similar ‘blue halo’ effect.

In fact, even on a single petal these light-manipulating structures were found to be surprisingly irregular. This is a phenomenon physicists describe as ‘disorder’.

The researchers conclude that these “messy” petal nanostructures likely evolved independently many times across flowering plants, but reached the same luminous outcome that increases visibility to pollinators – an example of what’s known as ‘convergent evolution’.

The study was conducted by a multidisciplinary team of scientists from the University of Cambridge’s Departments of Plant Sciences, Chemistry and Physics along with colleagues from the Royal Botanic Gardens Kew and the Adolphe Merkele Institute in Switzerland.

The findings were published in the journal Nature on 18 October 2017.

“We had always assumed that the disorder we saw in our petal surfaces was just an accidental by-product of life – that flowers couldn’t do any better,” said senior author Prof Beverley Glover, plant scientist and Director of Cambridge’s Botanic Garden.

“It came as a real surprise to discover that the disorder itself is what generates the important optical signal that allows bees to find the flowers more effectively.”

“As a biologist, I sometimes find myself apologising to physicist colleagues for the disorder in living organisms – how generally messy their development and body structures can seem.”

“However, the disorder we see in petal nanostructures appears to have been harnessed by evolution and ends up aiding floral communication with bees,” Glover said.

All flowering plants belong to the ‘angiosperm’ lineage. Researchers analysed some of the earliest diverging plants from this group, and found no halo-producing petal ridges.

However, they found several examples of halo-producing petals among the two major flower groups (monocots and eudicots) that emerged during the Cretaceous period over 100 million years ago – coinciding with the early evolution of flower-visiting insects, in particular nectar-sucking bees.

“Our findings suggest the petal ridges that produce ‘blue halos’ evolved many times across different flower lineages, all converging on this optical signal for pollinators,” said Glover.

Species which the team found to have halo-producing petals included Oenothera stricta (a type of Evening Primrose), Ursinia speciosa (a member of the Daisy family) and Hibiscus trionum (known as ‘Flower-of-the-hour’).

Almost all the plants studied, came from the Botanic Garden’s collection. “Having access to an amazing living collection of plants at the Garden really drives some of my research,” said Beverley Glover. “This project began with the chance discovery of a blue halo flower while walking through the Garden one day, and wouldn’t have been possible without all the other species that we were able to study whenever we wanted.”

“We found the blue halo in Leucocoryne species from the Alpine collection, in Hibiscus species in the Glasshouse Bays, in evening primroses, daisies and Penstemons from the Systematic Beds and in Grielum from the South African Temperate House. All of these are on display to our visitors, and in flower at different times of year”.

All the analysed flowers revealed significant levels of apparent ‘disorder’ in the dimensions and spacing of their petal nanostructures.

“The huge variety of petal anatomies, combined with the disordered nanostructures, would suggest that different flowers should have different optical properties,” said Dr Silvia Vignolini, from Cambridge’s Department of Chemistry, who led the study’s physics team.

“However, we observed that all these petal structures produce a similar visual effect in the blue-to-ultraviolet wavelength region of the spectrum – the blue halo.”

Previous studies have shown that many species of bee have an innate preference for colours in the violet-blue range. However, plants do not always have the means to produce blue pigments.

“Many flowers lack the genetic and biochemical capability to manipulate pigment chemistry in the blue to ultraviolet spectrum,” said Vignolini. “The presence of these disordered photonic structures on their petals provides an alternative way to produce signals that attract insects.”

The researchers artificially recreated ‘blue halo’ nanostructures and used them as surfaces for artificial flowers. In a “flight arena” in a lab in the Department of Plant Sciences, they tested how bumblebees responded to surfaces with and without halos.

Their experiments showed that bees can perceive the difference, finding the surfaces with halos more quickly – even when both types of surfaces were coloured with the same black or yellow pigment.

Using rewarding sugar solution in one type of artificial flower, and bitter quinine solution in the other, the scientists found that bees could use the blue halo to learn which type of surface had the reward.

“Insect visual systems are different to human ones,” explains Edwige Moyroud, from Cambridge’s Department of Plant Sciences and the study’s lead author. “Unlike us, bees have enhanced photoreceptor activity in the blue-UV parts of the spectrum.

“Humans can identify some blue halos – those emanating from darkly pigmented flowers. For example the ‘black’ tulip cultivar, known as ‘Queen of the night’.

“However, we can’t distinguish between a yellow flower with a blue halo and one without – but our study found that bumblebees can,” she said.

The team say the findings open up new opportunities for the development of surfaces that are highly visible to pollinators, as well as exploring just how living plants control the levels of disorder on their petal surfaces. “The developmental biology of these structures is a real mystery,” added Glover.