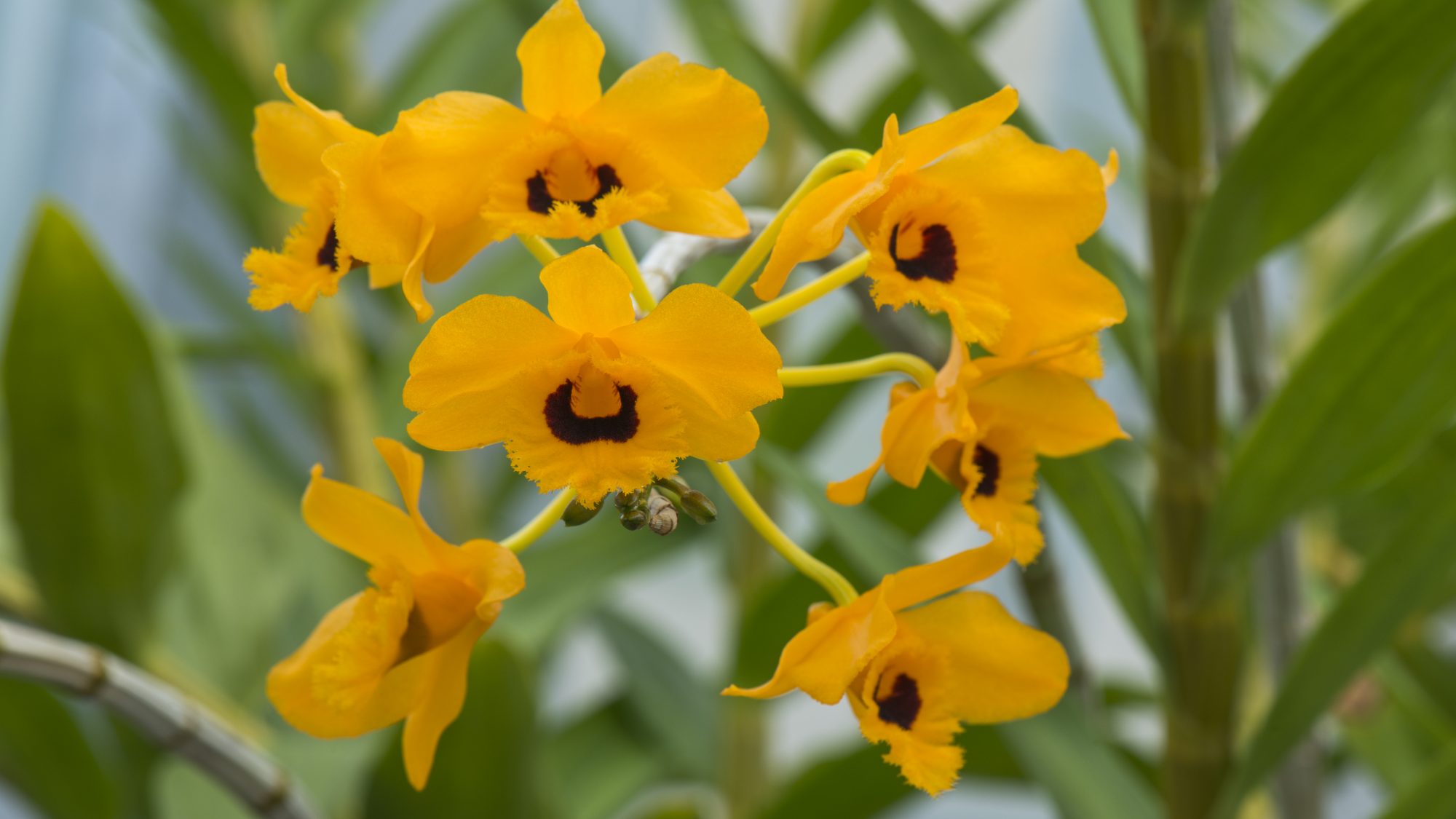 Orchids 2017: Another India, opens at the Garden

The Garden's annual orchid event opens this week after months of planning.

Step out of the cold into the welcoming warmth of the Garden’s Glasshouses as they are transformed into a technicoloured tapestry of vibrant displays to celebrate the plants and culture of South Asia.

Orchids 2017: Another India is an exploration of India’s natural heritage and is part of a wider University of Cambridge Museum (UCM) event, ‘India Unboxed’, to mark the 70th anniversary of India’s independence from Britain. Visitors to the Botanic Garden will be introduced to the many varied species of orchids growing throughout India’s diverse habitats, as different parts of the Glasshouses will showcase species from the cool growing orchids found in the Himalayas to the tree hanging species found in the steamy tropics.

Among the varied and vibrant orchids on display will be structures, images and objects representing different aspects of Indian culture alongside some of India’s key economic crops. Rice, pepper, cotton, turmeric and tea plants jostle with tea collecting baskets and hessian sacks to introduce the economic and cultural importance of these crops to the visitor.

CUBG Glasshouse Supervisor Alex Summers says:
“Orchids 2017 has been several months in the making and we hope it will open our visitors’ eyes to the ecosystems and diversity of the flora from the Indian subcontinent.”

Many of the orchids on display have been grown and looked after by Alex and his team at the Botanic Garden and getting them to flower for February has involved time, skill and patience. Alex continues: “We will have around 40 different orchid species on show and it’s been a labour of love to get them to flower and look their best. I’m often asked how we do this and the trick is to get the temperature environments and watering correct and so to do this on a large scale requires good understanding of each orchid’s native habitat!”

As well as tending to and installing the orchids, Alex has overseen the inclusion of art and artefacts all which add to the regional feel of the displays. Alex says: “The aim behind Orchids 2017 is to not just show the diverse ecosystems of the Subcontinent but also to show how they feed into the culture. We’ve worked closely with colleagues from the University’s Museum of Archaeology and Anthropology, who are holding an exhibition through March and April which also marks the 70th anniversary of India’s independence from Britain, to make sure everything on show is as authentic as possible. For example we’ve built a mock house front and painted an Indian pithora mural on the front; we have suspended two large Gond images of an elephant and antelope to inject some art into the displays and we’ve assembled a temple structure which will preside over the pool in the Wetlands house.”

All the plant and cultural displays will be accompanied by small fact boards detailing the ecosystems of South Asia and some of the economic crop species to visitors.

Further information:
India Unboxed marks the UK-India Year of Culture 2017. The University of Cambridge Museums and Botanic Garden (UCM) will celebrate a shared season on the theme of India – a programme of exhibitions, events, digital engagement, discussions, installations and more within the museums and the city of Cambridge. Rooted in the museum collections, the programme will use innovative platforms and formats to explore themes of identity and connectivity for diverse audiences in the UK and India. Stepping beyond the boundaries of stereotypical perceptions, India Unboxed will enable contemporary and critical engagements, celebrating the diversity and plurality of the subcontinent and its unique relationship with the UK.

The Garden is also running a programme of special events to complement the orchid displays:

Twilight! Make a moonlit mandala
Wednesday 15 February 2017, 4.30pm – 7.30 pm, free
A torchlight trail through our Glasshouse Range will focus on plants from India as visitors travel from the cool Himalaya to the steamy southern states of Tamil Nadu, Kerala and Goa. The Glasshouses will be beautifully lit, bringing alive the vibrancy and colour of the region. At each area families can stamp their own hanging mandala decoration with images that represent the plants in the Glasshouse Range and the areas they come from. A mandala is a symbol used within Indian religions, often to assist with meditation. Mandalas represent the entire universe, full of precious things. By the end of the trail, mandala decorations will be filled with a representation of the special world within the Glasshouses.
The Garden Cafe will be serving until 7.20pm and the shop until 7.15pm.
Entry and Exit to this event is through the Brookside Gate only.

How to grow orchids
Wednesday 22 February 2017, 6.30pm – 8.30pm, book online, £30
This course will provide an overview of orchid cultivation for the interested amateur. The evening will cover everything from watering to repotting and will be delivered in the Glasshouse potting shed by the Glasshouse Supervisor and Orchid Specialist Volunteer.

Himalayan Plant Hunters
Wednesday 8 March 2017, 10am – 1pm, book online, £35
Discover the stories of three great Himalayan Plant Hunters in this session led by Christine Bartram of the University of Cambridge’s Herbarium. The morning will include a brief tour of the Garden’s glasshouse range to see some of the plants we are able to grow as a result of Plant Hunter discoveries. This will be followed with a visit to the Herbarium, housed in the Sainsbury Laboratory, to see displays of some of the actual preserved plants collected by them.