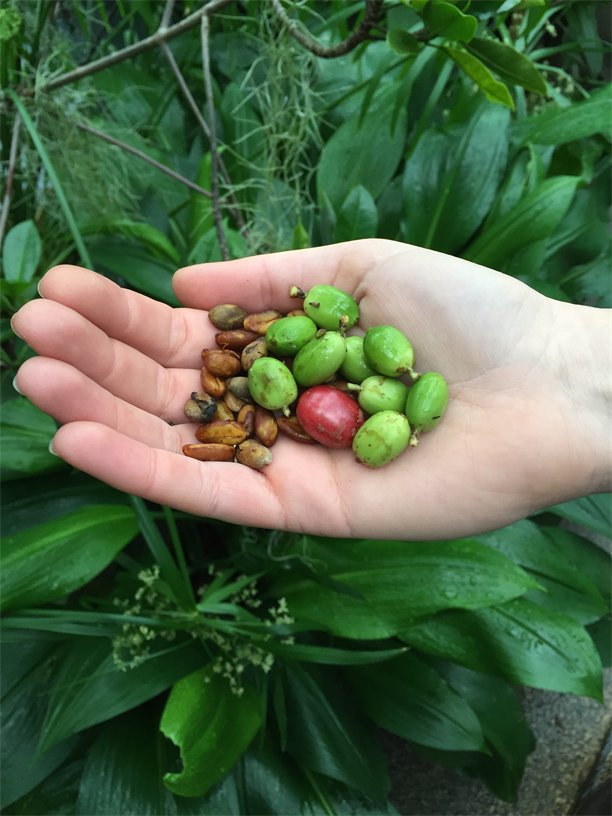 Naked Scientist Producer Graihagh Jackson says: “We’re producing a programme all about coffee and caffeine and investigating whether it really is good or bad for us. It’s great to be able to come to the Botanic Garden and have the opportunity to see coffee plants in the flesh so to speak, find out more about where the wild and cultivated plants come from and learn about the harvesting process.”

Glasshouse Supervisor Alex Summers was on hand to talk to the radio crew about the cultivation of coffee and the recent propagation of old plants at the Garden to allow these to be replaced. He also explained the similarities and differences between the two main coffee species cultivated today and their suspected origins. Coffea Arabica accounts for almost 80 percent of the world’s coffee, while Coffea canephora, better known as Robusta coffee, accounts for just 20 percent of the market.

Caffeine is one of the most common drugs consumed by Britons in soft drinks, tea and coffee and Graihagh asked Alex why plants produce caffeine.

“Caffeine is poisonous for insects, acting as an anti-herbivory agent for the coffee plants” explains Alex. “What’s interesting, is that spiders have been used to test drug toxicity, recording the effects by measuring the deformity of the web produced. It was noted that spiders produced a more erratic web under the influence of caffeine compared to other drugs trialled.”

The Naked Scientist will be investigating further the physiological effects of caffeine – discussing if it’s good or bad for us and talking to experts about the associated health benefits of caffeine including a lower risk of cardiovascular disease, Alzheimer’s and type 2 diabetes.

About the Garden’s coffee plant collection:

The Garden currently grows three species of Coffea, these include the two species which are grown for coffee beans. Both Coffea arabica and Coffea canephora are from afromontae environments in Ethiopia and the Yemen, which have a subtropical climate, with temperatures ranging between 15°C to 25°C. Grown from seed, plants will take between five and seven years to mature and produce fruit. The plants in the Glasshouses flower in the summer months producing fragrant white blooms. These are followed by fruits which develop during autumn and winter.

The coffee plants can be found in the Glasshouse Range in the Main Tropics, near the pond. They are grown primarily as a resource for the University’s research and education programmes, as well as demonstrating plant diversity to the visiting public including where the plants originally come from and the habitats in which they naturally grow.

To find out more tune into the Naked Scientists on BBC Radio Cambridgeshire Sunday 7 February at 6pm.

From bean to cup: the perfect brew