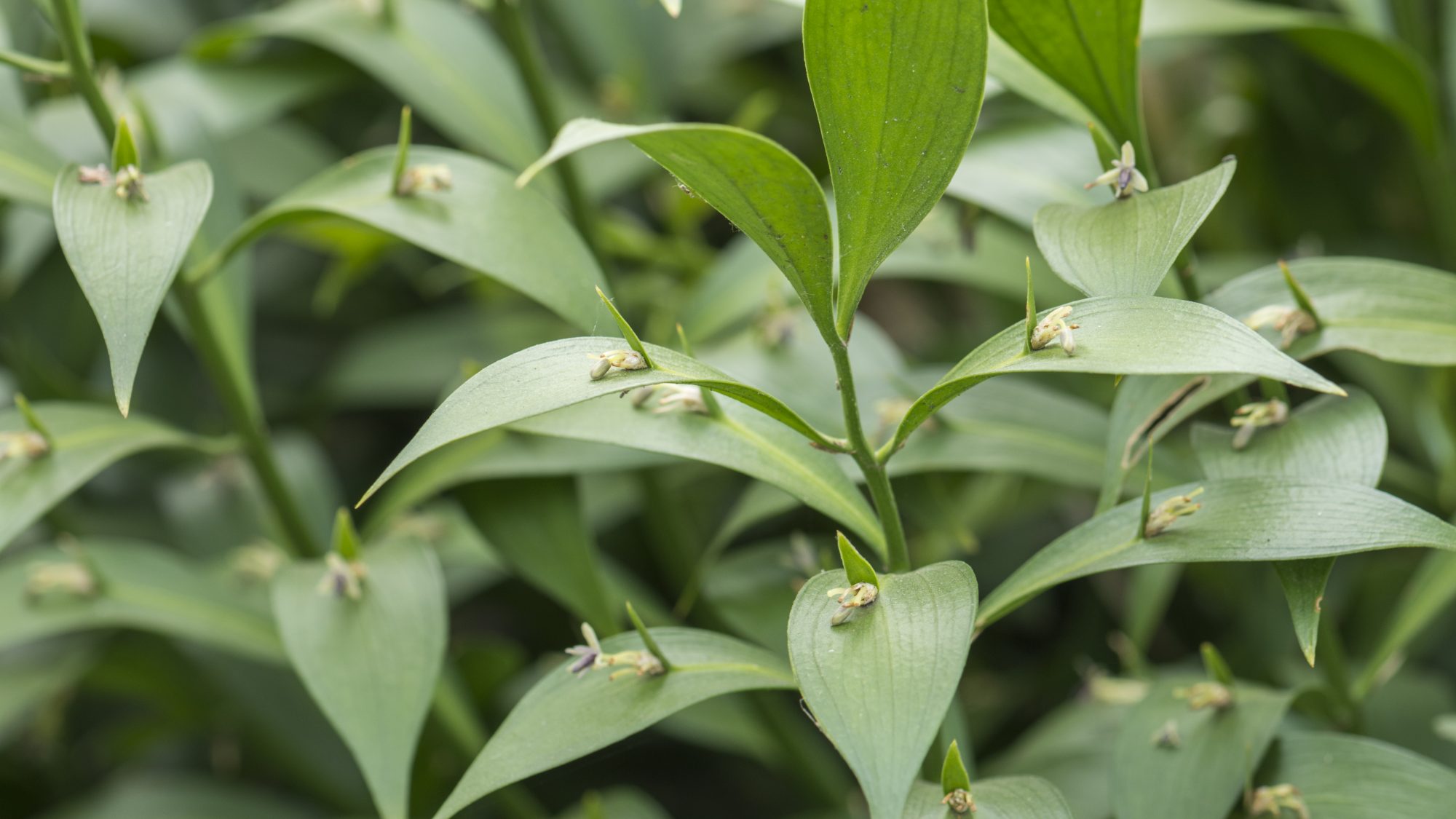 Ruscus is an intriguing genus of six species that occur from Madeira through southern Europe to Iran. As Garden plants, they are well-known for their dark green evergreen shoots and their ability to survive in dry shaded positions.
The collection grew out of the research work of Dr Peter Yeo during his tenure as Garden Taxonomist, as a result of which he published a revision that remains a key work on this group. This reference collection is used throughout the Garden as an evergreen ground cover, particularly in shaded positions. In the wild, the genus naturally grows in the understorey of woodlands and thrives in these habitats. The plant will colonize large patches through its spreading rhizomes (underground stems), from which the deep glossy green foliage arises, giving structure and interest through the year. The shoots bear large, globular bright scarlet fruits, particularly attractive in winter, which appear to emerge from the leaves. However, these leaf-like structures are not true leaves, making these plants a botanical oddity.

The apparent leaves are, correctly, flattened stems and are known as cladodes. The flowers (which botanically can only be borne from a stem) hence appear in the middle of these leaf-like structures and are soon followed by the berries. The true leaves are actually reduced to small scale like structures, most readily seen appending the flowers at the appropriate time of the year. This growth form is very reminiscent of Asparagus, and they are now included in the same family. In most cases the small, greenish flowers are either male or female. Hence, only female plants will produce berries. However, plants have been selected in cultivation which bear both male and female parts in their flowers (hermaphrodite), meaning that just a single plant is required to produce berries.

Several species make good garden plants. Perhaps most widely grown is Ruscus aculeatus, which is native in southern England and occurs across southern Europe. It forms an erect plant, 50—80 cm high, and grown for its shoots bearing prickly cladodes, bright red berries and well-used for its ability to survive in deep shade. This is the species known as ‘Butchers’ Broom’, which butchers indeed used to use to sweep their blocks.

The larger leaved R. hypoglossum, also from southern Europe, is a more leafy plant with arching stems that bears cherry-red fruits, and, again, it makes excellent ground cover in shade. The hybrid between these species, R. microglossus, forms large suckering patches and makes an attractive alternative. Worth seeking out is the unusual R. colchicus from Iran and R. streptophyllus from Madeira, which grow in the corridors of the Glasshouse Range.

Closely related genera that can also be found in the Garden are the rare climbing Semele androgyna from the Canary Islands that thrives in the Glasshouse corridor, and Danae racemosa, the Alexandrian Laurel, which is widely planted as a foil to other plants.