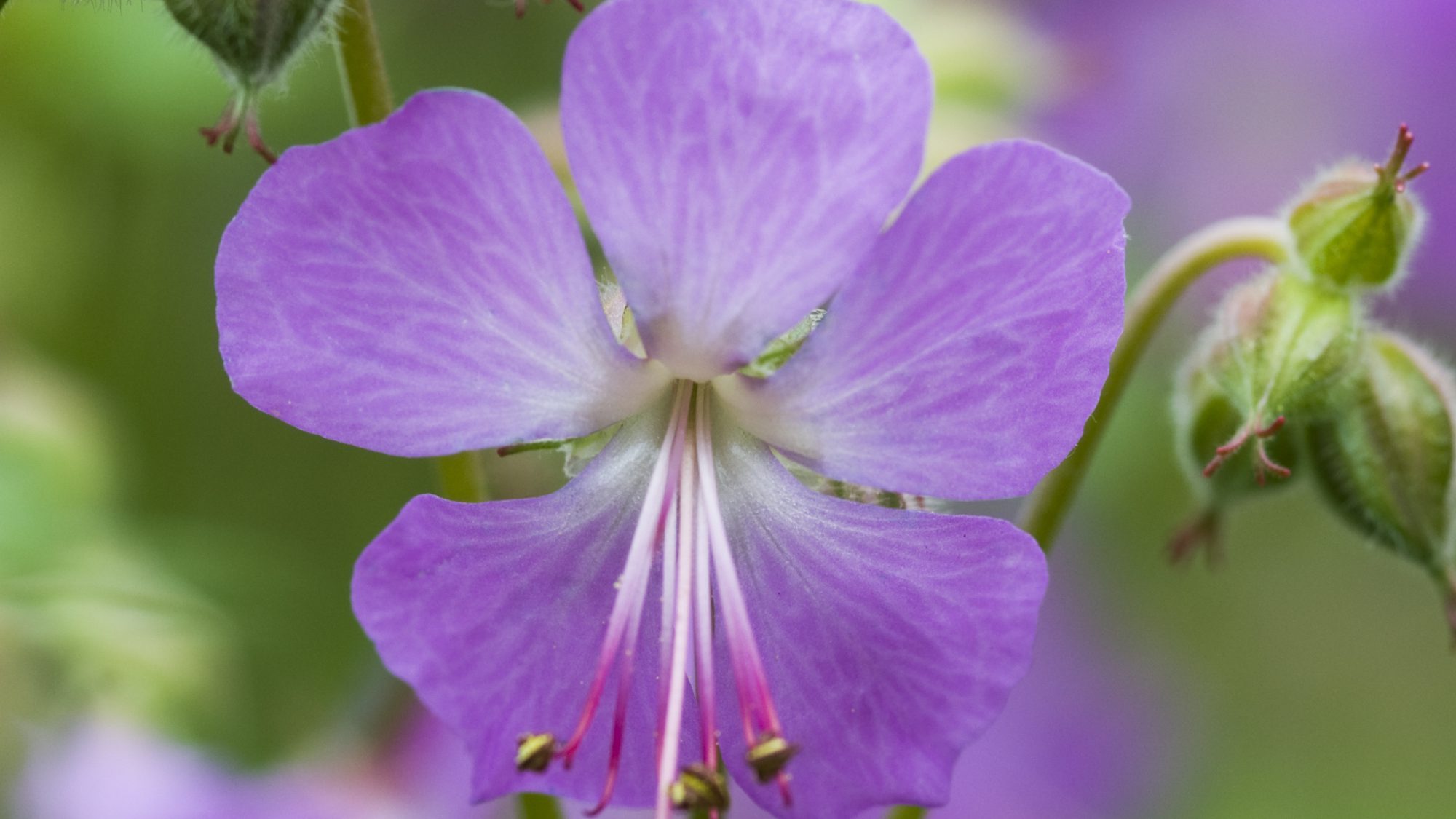 Geraniums, or cranesbills, are familiar and perennial inclusions in herbaceous borders.

Geraniums, or cranesbills, are familiar and perennial inclusions in herbaceous borders. With a great many of the more than 260 species in cultivation, the choice is sometimes bewildering for the gardener.

The genus Geranium is widespread throughout the temperate regions of the world although some species occur in montane areas of the tropics through to islands as far flung as Madeira and Hawaii.

Our National Collection grew out of the research work of Dr Peter Yeo, taxonomist at the Garden for 40 years, who investigated the often muddled taxonomy of the hardy species of Geranium in cultivation. His work brought order to the confusion of incorrect names and identifications. His book Hardy Geraniums still remains the key work on this group. Many of the plants and accessions described in his book can be found in the collection. In recognition of the breadth of the collection and the research work of Dr Yeo, the collection was accorded Scientific Status in 1999. There are also many hundreds of Geranium cultivars some of which are the result of complex crosses. These are well represented in other collections held by others under the Plant Heritage scheme.

Amongst the collection are several hybrids and cultivars named by Dr Yeo. One of the best is Geranium ‘Brookside’, a superb, long-flowering garden plant that is a hybrid between G. clarkei and G. pratense and was named after the Garden’s administrative offices. It received an Award of Garden Merit (AGM) from the Royal Horticultural Society in its recent trials. An attractive pink variant of G. pratense var. stewartianum ‘Elizabeth Yeo’ was selected from a batch of seeds originating from the Himalayas and named for Dr Yeo’s wife. Dr Yeo himself is commemorated by G. x magnificum ‘Peter Yeo’ and the Madeiran species, G. yeoi (previously G. rubescens), a self-seeding annual/biennial grown in the shelter of the Glasshouse Bays.

Several new hybrids where also named by Dr Yeo and one of the best and most popular is G. x cantabrigiense, a hybrid between G. macrorrhizum and G. dalmaticum. It makes an excellent groundcover in both sun and shade bearing light green foliage and pink to white flowers. Several cultivars are available, of which ‘Cambridge’ is a cross raised here. The original plant of the hybrid G. x monacense (G. phaeum x G. reflexum) from which this new hybrid was described can still be found in the Woodland Garden.

These beautiful and hard-working garden plants are used throughout the Garden, but are concentrated in the western part of the site. The Rock Garden provides niches for smaller growing species requiring sun, while the shade-loving geraniums are grown in the Woodland Garden. The bulk of the collection, including many common hybrids and their parent species, is grown in the long border along Lynch Walk that leads to the Glasshouse Range. Here they are grown in association with herbaceous peonies – the lower growing foliage and flower of the geraniums clothing the bare lower stems of the peonies. On the Systematic Beds, the family Geraniaceae can be found on the western side, where the related pelargoniums and erodiums are also grown for comparison.The geraniums flower principally from April to July and the majority are at their best in early June. We are currently developing new beds to illustrate the three subfamilies in Geraniaceae which are distinguished by their differing seed dispersal systems.

These appealling plants are relatively easy to grow in any free-draining soil, and with their versatility, hardiness and beauty, many make indispensible garden plants. They range in colour from white to dark plum through an array of pinks, blues and purples. Underplanted with spring bulbs, they make excellent work of enveloping the untidy bulb foliage after flowering, and give new life to a border otherwise left bare when the spring bulbs are over.

Most Geranium require sun, although in the dry climate of Cambridge they perhaps thrive best in light shade. Plants can become untidy after flowering, but most of the taller growing herbaceous Geranium respond well to pruning by producing a fresh flush of foliage.

The distribution of AGM honours to the top-performing Geranium in the recent RHS trial provides an excellent guide to the best garden plants.