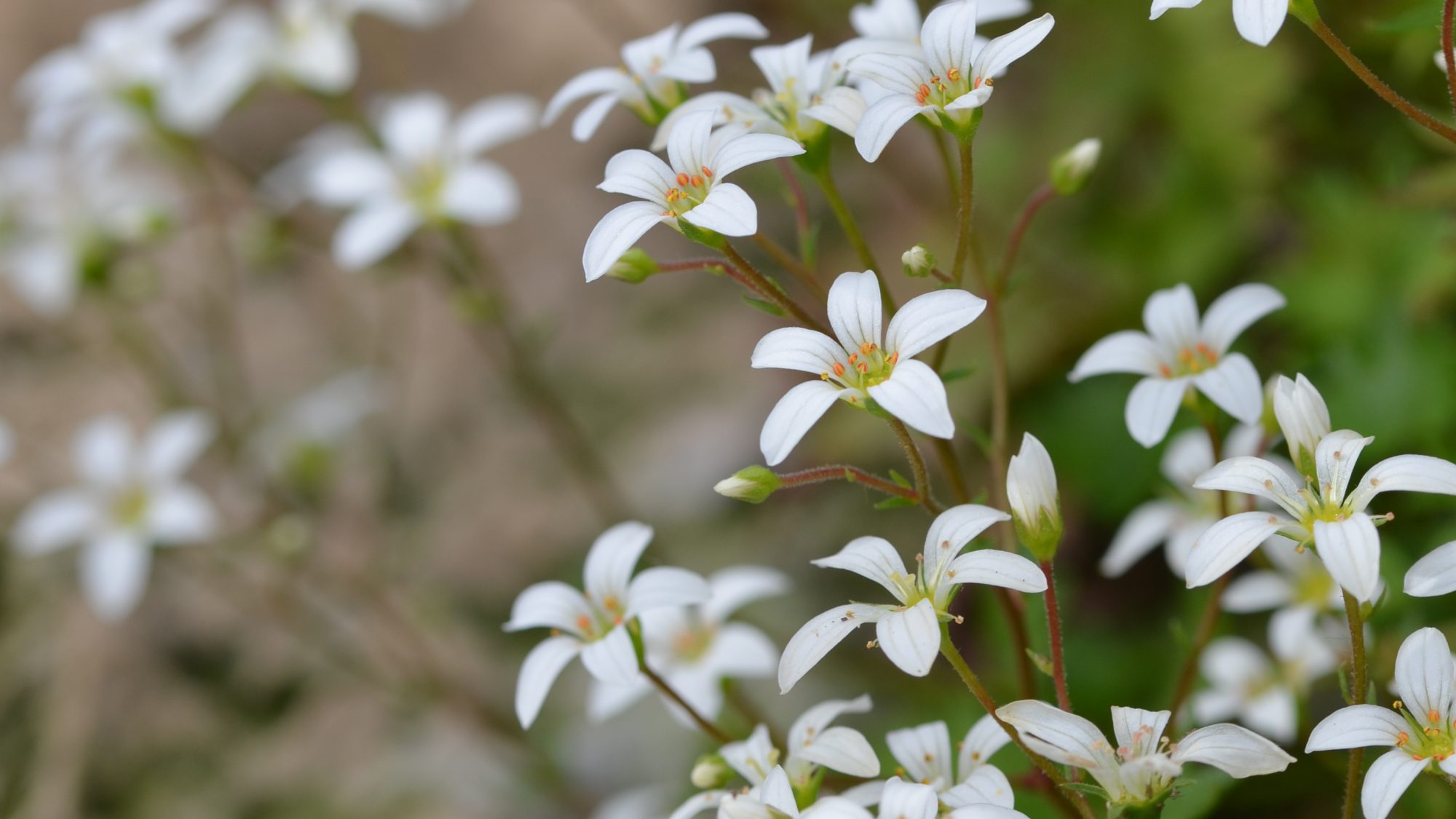 The tight hummocks and large colourful flowers of many saxifrages have captivated gardeners for centuries.

The tight hummocks and large colourful flowers of many saxifrages have captivated gardeners for centuries. The largest genus in the family Saxifragaceae, there are about 440 Saxifraga species worldwide. In Europe – the focus of our collection – there are over 100 species which occur from the high mountains of the arctic tundra to shady rock faces in southern Europe.

The name Saxifraga is from the Latin meaning ‘stone-breaker’. This, however, refers to its ancient medicinal use for treating urinary stones, rather than the habit of many growing in and fragmenting rocks.

Our collection has its origin in a collaboration between former Garden Director, Dr Max Walters and Dr David Webb from Trinity College, Dublin, while they were working on the Saxifraga account for Flora Europaea. The collection was established to provide a working collection for taxonomic study and to safeguard stocks of correctly-identified material of known origin for conservation purposes. It also had another goal to act as a pilot scheme to test the feasibility of maintaining collections in botanic gardens over a period of time. Over 30 years later, the collection is still held by the Garden.

Given the wide-ranging distribution and ecology of the species, not all have proved success in cultivation here in Cambridge. Those from the high arctic regions that require cool, moist conditions near impossible to recreate in Cambridge, do not persist with us in cultivation. This is also true of some of the species often found in wet boggy areas. However, other groups in Saxifraga do grow well in the dry Cambridge climate. To provide the right conditions, the collection is grown between the protection of the Mountains display in the Glasshouse Range and the Alpine Yard behind, and on and around the Limestone Rock Garden.

Some of the most successful species are the silver saxifrages (section Ligulatae), which are primarily found through the mountains of southern Europe. These species form evergreen rosettes of thick, stiff leaves with typical lime-secreting pores on the margins. The lime they secrete can encrust the leaves giving rise to the name ‘encrusted’ or ‘silver’ saxifrages. They produce delicate sprays of white flowers that erupt from the centre, although each flowering rosette then shrivels and dies. In most species, spent, flowered rosettes are replaced by a side rosette. Saxifraga paniculata is a one of the most hardy and persistent species from which it gets its common name, ‘Lifelong Saxifrage’. The silver rosettes coalesce into mats shown to their best advantage grown trailing over rocks. Another easily cultivated species is S. callosa, which is remarkable for the extremely wide range of variation it exhibits, sometimes belying they belong to the same species. Many of these different variants can be seen in the collection.

Section Porhyrion includes the many cushion-forming species, consisting of many small rosettes that can form near-perfect domes. The large colourful flowers have made them a favourite of the alpine gardener, and many cultivars have been selected and hybrids made. These cultivars and hybrids are well represented in other National Plant Collections of saxifrages. Many species come from the mountains of Europe, although the section extends into the Middle East and Asia. They vary greatly in their cultivation needs, with some grown outside on the rock garden while others need the protection of the Alpine House, and are bought forward into the Mountains display when in flower.

Section Gymnopera (‘London Pride’ saxifrages) is a complete contrast. Tough and dependable, they prefer shade and are more usually found in woodland, on shaded banks or, in more exposed sites, growing in the shelter of rocks. Two key species are S. spathularis, which is found from western Ireland to Spain, and S. umbrosa, which is native to the central Pyrenees. These species have crossed in cultivation to produce ‘London Pride’ (S. x urbium), known for its evergreen rosettes of leaves, floriferous pinkish flower spikes and ability to survive neglect in gardens. The species and hybrids of this species are grown within the shade of the magnificent bean tree, Catalpa x erubescens ‘Purpurea’, which dominates the Limestone Rock Garden.

The final, main group of saxifrages, well-represented in the collection, are the Mossy Saxifrages. Although this group extends in its distribution to the Americas, North Africa and the Caucasus, the greatest diversity is displayed amongst the many species from southern Spain and northern Italy. Amongst the most attractive and easiest to grow in the open garden are S. canaliculata and S. trifurcata, both of which survive well in the Cambridge climate. For the gardener they reach their greatest diversity amongst the numerous hybrids, which, when well grown, can form large rounded mounds and present a wide range of flower colours. The first of these hybrids appeared around 1870 and the craze reached a peak in the early 20th century.

Many saxifrages are mountain plants with narrow distributions, often facing threats from habitat destruction. The prospect of climate change could be an even bigger threat to some species in the wild, notably those that are found on mountain tops. The original conservation aim of this collection may hence prove even more important in the future than first thought.