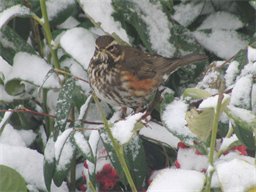 Birds are numerous in the Botanic Garden with abundant food and safe nesting sites. Over 100 species have been recorded with the most easily seen being blackbirds, robins and the ubiquitous wood pigeon. The Lake is home to moorhens and mallards, that usually raise several broods of ducklings each year.

Other conspicuous species are jays and magpies whilst a pair of black carrion crows is frequently seen stalking across the Main lawn looking for grubs. Great-spotted and Green woodpeckers both occur and their breeding holes are sometimes given away by the noisy chicks demanding food in early summer.

We are pleased to have good populations of the increasingly rare song thrush whilst mistle thrushes can often be seen in winter atop of trees full of Mistletoe. The Garden also has good populations of great and blue tits whilst flocks of long-tailed tits are often heard as they search for food from tree to tree. Other species that can be seen include greenfinches, dunnocks, goldcrests, chiffchaffs and wrens.

A pair of sparrowhawks usually nest, preying on the smaller birds. You can often hear them calling as they fly over the Garden in summer and they can sometimes be seen giving exhilarating hunting lessons to their offspring. Swifts are also common in the skies in summer with flocks of over 20 a frequent sight enjoying the plentiful supply of insects.

The shoals of rudd in the Lake attract kingfishers, most readily seen in winter, while the thick reed cover provides nesting sites for little grebes in most years. After closing time the large silhouettes of herons can be seen flying in for a fishy supper.

During migration periods, the Garden acts as a resting and refueling place. Reed warblers, hobbies and honey buzzards pass through, and even a white stork has circled overhead. In winter, the berries, particularly of Cotoneaster species, draw in flocks of redwings and waxwings. Other winter-visiting birds include migrant blackcaps from the Continent, and a firecrest over-wintered in the Scented Garden a few years ago.