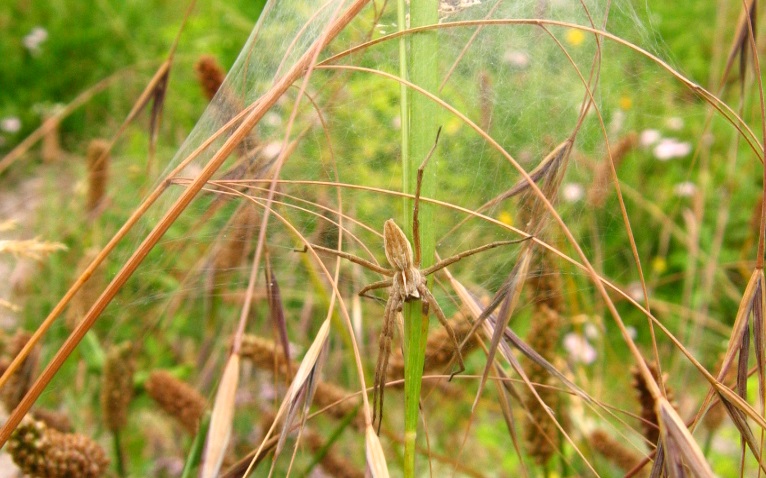 The invertebrate life of the Garden is very numerous and diverse and include many species of butterflies and moths, flies, aphids, spiders, dragonflies, bees and wasps. The flowers in the bee border, scented garden and systematic beds are particularly good places to see a wide range of nectar feeding insects.

Butterflies are amongst the most obvious invertebrates in the Garden. The pale yellow of the Brimstone butterfly is usually the first to be seen out fluttering on sunny March days, and are often joined by overwintering Comma, Peacock and Red Admiral butterflies. Later in spring, Orange-tips and Speckled Woods frequent sunny glades, and are perhaps the most commonest species. A flash of blue is likely to be a Holly Blue, whilst the orange wing of the summer Copper is rare sight. Of the grass-feeding species Meadow Browns, Gatekeepers and Large Skippers all occur. Large, Small and Green-veined Whites complete the most commonly seen butterflies. Painted Ladies also occur, sometimes swelled in numbers by continental migrants, and sometimes joined by the occasional Clouded Yellow.

The Garden provides an important habitat for many types of bees including Honey, Social and, perhaps the most obviously seen, Bumblebees. These harmless, usually ground-nesting bees often use our undisturbed boundaries for their nests. These include common species such as White, Buff and Red-tailed Bumblebees, which are readily seen.

Common wasps play an important part in helping to control insect larvae feeding on the plant collections. Often much-maligned for hijacking sugary foods in the summer, in the spring they are very much the gardener’s friend using their sting to paralyse caterpillars as food for their young. In the late summer, hornets (rather like large wasps) have become a more common sight in recent years.

The Garden is a good place to see damsel and dragonflies. First to emerge from May onwards are the Blue-tailed Damselfly and Banded Demoiselle, which is readily recognised by the blue-spotted wing. Later in July, dragonflies can be seen patrolling and hovering over the lake looking for insect prey. The Emperor dragonfly and Southern Hawker are two of the most prominent of the larger species. In late summer, the Common Darter, smaller in size with red colouring, is a frequent sight. All these species lay eggs in the water; the carnivorous larvae feed on the waterbed, often for several years before emerging as adults.

Slugs and snails are usually unwelcome in the garden. Although they can damage plants and particularly seedlings, they also play an important role in feeding on dead and dying vegetation and helping to recycle garden waste naturally. We only undertake limited slug control when necessary to protect valuable plants and new seedlings, relying on other wildlife that feed on them to control numbers. The broken shells of snails can often be found on the Limestone Rock Garden, where thrushes use the rocks as anvils.

Other invertebrates which can often be seen include St Marks Fly, hovering in sunny glades. Its common name refers to the fact that it usually emerges around St Mark’s day on 25th April. Hoverflies of several species are common and particularly enjoy feeding on teasel flowers and poppies, harvesting the pollen for food.

This is just a small sample of the invertebrate fauna inhabiting the Garden that are readily seen.