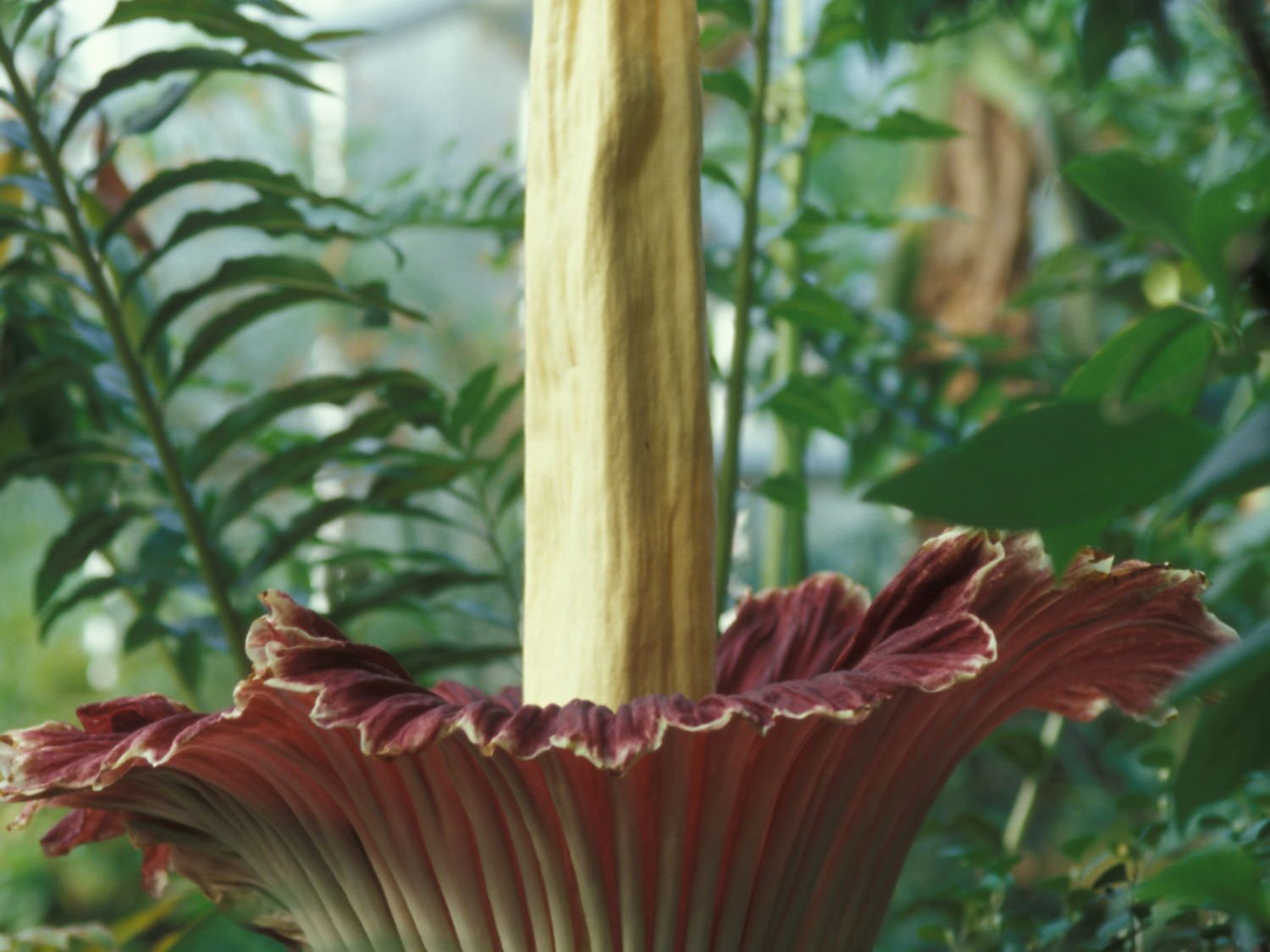 Cambridge University Botanic Garden thanks all Titus followers and visitors for contributing to a Titanic success!

The Garden has experienced record visitor numbers this June, thanks to the flowering of the rare, tropical bloom of ‘Titus’ the Titan Arum. Head of Visitor Services, Nicci Steele-Williams whose team looks after the Garden’s visitors says: “June turned out to be a month of surprise for us here at the Garden, with our friend Titus the Titan having enthralled us and our visitors during the last week.”

The Garden’s total monthly visitor figure for June was 33,532: the first June ever that the Garden has recorded over 30,000 visitors and some 4,500 higher than the previous highest in June 2015 – just before the last Titan ‘Tiny’ flowered.

The Garden’s gates, which usually close at 6pm during the summer, stayed open until 10pm on Monday 26 June and Tuesday 27 June to allow visitors and Titus followers to come and see, and more importantly smell, the plant’s stench of rotten flesh which is what gives the Titan Arum its common name of the ‘corpse flower’.

Nicci continues: “In total, we had just over 3,500 visitors over those first two days Titus was in flower, including our late openings, which was amazing considering we only knew at 3pm on the Monday that Titus was beginning to open. Added to this on Tuesday, we found ourselves up against nature’s elements with torrential rain and thunderstorms, but people still came to queue and see this rare spectacle, in really great spirits considering the weather.”

Director of the Garden, Professor Beverley Glover who spent both evenings with staff at the Garden chatting to visitors and explaining the science behind the bloom and its smell says: “We are all nuts about plants here at the Garden and were absolutely delighted that so many people came to see and smell Titus. It was a real thrill for us to be able to share this excitement with so many visitors, and of course we hope many of them will come back to visit the Garden again and see the rest of our wonderful collection of amazing plants. We hope events such as this inspire people to find out more about the natural world around us.”

Native to Indonesia, Titan Arum plants are categorized as a vulnerable species. They are also rare in that they are known to flower only every 7-10 years and when they do, the flower and its pungent smell only last for around two days as the stench it produces is the plant’s mechanism to allure carrion beetles who are known in the wild to pollinate it.

Outside of the rainforests, the plant has to be hand pollinated. Staff at the Garden worked late into the night on its first night of flowering, after the last visitors had gone home, to hand pollinate the plant as the Titan Arum cannot self-pollinate. Despite the large and impressive appearance of its flower-like structure, known as its inflorescence, the plant’s real flowers are found around the base of the plant. On the first night of opening, when the plant is at its smelliest, the female flowers are ready to be pollinated. By the second night, these flowers have faded and the male flowers take centre stage to produce pollen for the carrion beetles to hopefully carry to another plant. To hand-pollinate the plant, Glasshouse Supervisor, Alex Summers cut a small hole in the base of the plant to access the female flowers and mimicked pollination using pollen sent to the Garden from the Eden Project and from Royal Botanic Garden Edinburgh, brushed onto the flowers with a paintbrush. (This pollination process was exclusively filmed by BBC’s Gardener’s World, and will be aired on the BBC mid-end July).

Alex will know in a couple of weeks if pollination was successful and if it is, the Garden hopes to see fruits develop which should ripen in December. Alex will collect the seed and sow a new generation of Titan Arum plants which will be propagated at the Garden and shared with other Botanic Gardens, all working to conserve this wonderful tropical giant.

As well as pollination, Professor Beverley Glover and her research team, took the opportunity to take samples from the collapsed spear-like spadix of the plant as well as its female flowers to use in research into how the Titan Arum makes such an enormous, complex flowering structure.

About Cambridge University Botanic Garden:
Cambridge University Botanic Garden (CUBG) is one of the largest University-owned botanic gardens in the world. The 40-acre Garden’s unparalleled living collection of over 8000 species, with glasshouses, experimental plots, herbarium and botanical library, exist to support University teaching and research. CUBG also collaborates with national and international researchers from a wide range of partner organisations, including universities, conservation bodies and botanic gardens worldwide, to promote the conservation and scientific understanding of global plant biodiversity.

The Garden is partly funded by the University but also relies on admissions and donations which help continue its work conserving and educating about endangered species such as the Titan Arum, as well as working in the local community and with scientists around the world.