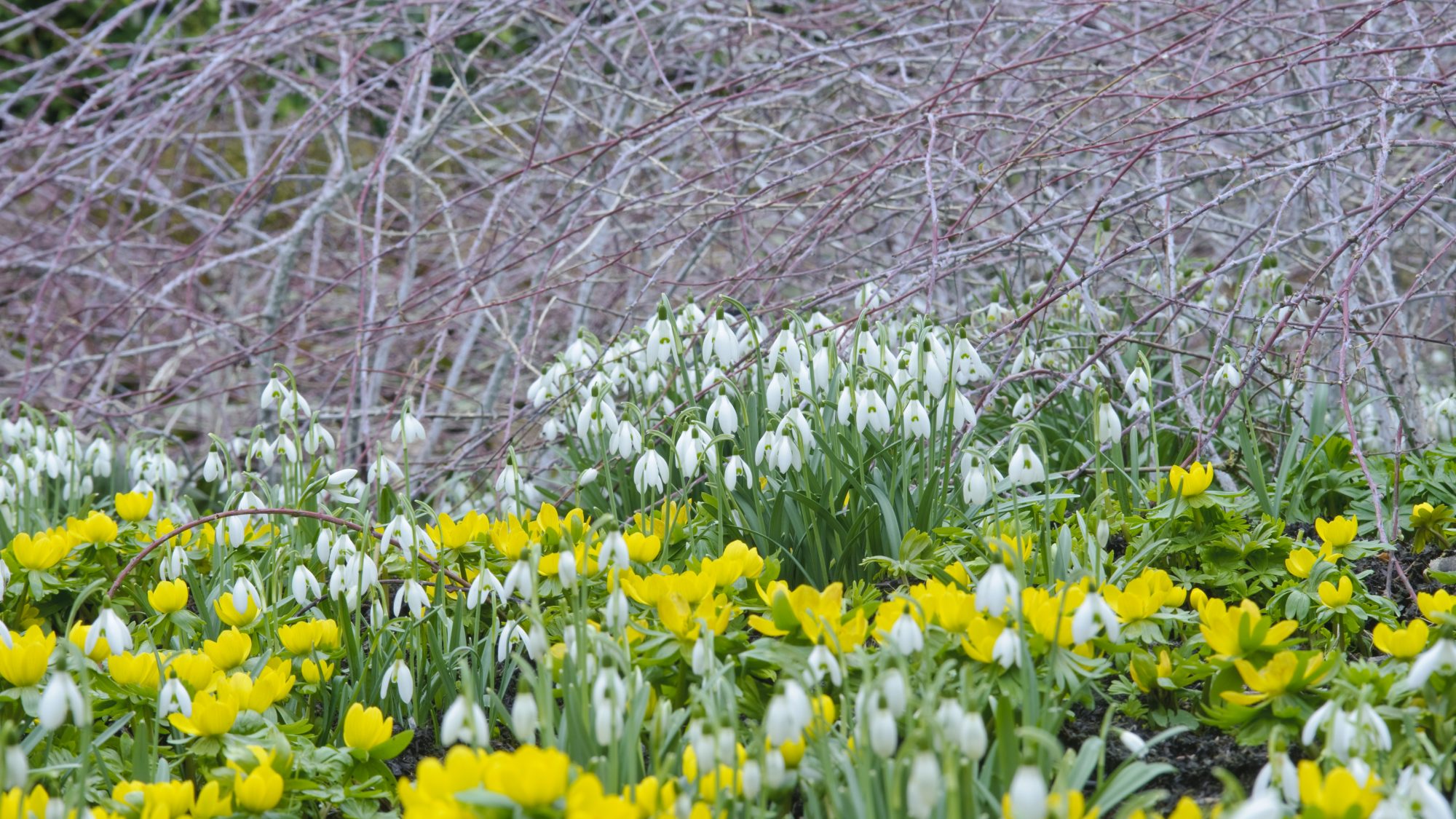 40 years on, the Winter Garden remains at the forefront of winter gardening.

This year we celebrate the 40th birthday of our Winter Garden – a vibrant, colourful and fragrant space of brightly coloured stems, ornamental trees, flowering shrubs, perennials and bulbs.

In 1979, CUBG was the first botanic garden in the UK to dedicate an area solely to plants offering ornamental winter interest. The Winter Garden was designed in the late 1970s by CUBG’s then superintendent, Peter Orriss and supervisor Norman Villis. Today, it is overseen and gardened by Demonstration and Display Supervisor, Pete Kerley and Assistant, David Austrin.

“The concept of having a garden that was beautiful in winter was a novel idea in 1979.”

Pete Kerley worked in the Winter Garden in 1979 and has played a key role in the planting scheme of the garden over its 40 years.

Pete explains: “The concept of having a garden that was beautiful in winter was a novel idea in 1979.  The idea of creating a winter garden was first conceived in 1951 by John Gilmour, then Director of CUBG. We had a collection of winter interest plants grown in a very formal way, in a long narrow corridor which was lost due to redevelopment in the Garden.”

Pete continues: “The decision was made to create a new display area for the winter interest plants and to showcase them in a more ornamental way. Peter and Norman dug out a south-facing hollow, creating two shallow valleys facing southwest and southeast to maximize the angle of the winter sun and forming a sheltered microclimate for the plants. This became what is now our Winter Garden.”

The key to the new design was the use of winter light. The garden is south-facing with a meandering path running east-west. The low winter sun shines across the garden to back light one side and spotlight the other. It is this light, combined with the clever use of colour and structure which makes the Winter Garden and its plantings look so spectacular.

Pete continues: “Back in the early 1980s, we started to get requests from other gardens asking for the names of plants we were using and its reputation began to grow. Since then we’ve continued to introduce new plants and cultivars so that the garden remains at the forefront of winter garden planting and continues to demonstrate a wide variety of plants that give as much winter interest as possible in a beautiful and dramatic way.”

What’s gone out, what’s come in and what has stayed the same:

Pete and David explain how they keep the Winter Garden evolving – as new cultivars are introduced, tastes change and they also enjoy experimenting with different plant combinations.

Pete says: “Originally in the 1980s there were large plantings of heathers and conifers in the Winter Garden. We’ve now removed the large conifers Lawson Cypress ‘Pembury Blue’ (Chamaecyparis lawsoniana ‘Pembury Blue’) and Thuja ‘Rheingold’ – partly because they got too big and out of scale and also because they were part of the 70’s fashion.”

Now Pete and David are enjoying experimenting particularly with plants native to New Zealand. Pete explains: “Many plants from New Zealand have strong structural elements, adding diversity to the planting style.” New plants include many more grasses, bamboo, and New Zealand plants such as New Zealand flax, New Zealand pampas grass, the ‘tangled’ shrub Muehlenbeckia astonii which is rare and threatened in the wild, and drifts of Libertia peregrinans with its striking orange to amber, unusual evergreen grass-like foliage with olive green central stripes.  All combine together to provide structure and colour throughout the garden.

New cultivars, as well as some rare and unusual plants, have been introduced into the planting schemes.

The dogwood Cornus sanguinea ‘Midwinter Fire’ which was discovered in a garden in Germany in 1980, is planted in swathes to create striking winter colour with its flame-coloured stems; Daphne bhloua ‘Jacqueline Postill’ with its heady scent greets visitors at the garden’s entrance – “the grass always wears thin in front of this shrub” explains David, “as it’s beautiful to look at and smell – it pumps out such a perfume and is a real hit with the visitors as the thin lawn testifies!” This was introduced in the 1980s, when higher altitude collections known to be hardy were brought in. The honeysuckle Lonicera elisae, collected in China in 1983 by Roy Lancaster who donated it to CUBG, is another relatively new addition. Rubus phoenicolasius, the Japanese wineberry, is traditionally grown in the fruit garden for its berries but Pete and David started to use it for its ornamental qualities with its bristly red arching stems which look stunning when backlit by the sun.

Rare and unusual bulbs such as Fritillaria raddeana and Eranthis cilicica provide a carpet of colour beneath the shrubs and trees. David explains: “The Eranthis cilicia is a gem and flowers later than the common winter aconite with a smaller ruff, making the flower look more striking.” Eranthis x tubergenii ‘Guinea Gold’ is sterile so can only bulk up by division, making it quite rare. Adonis amurensis  has flowers similar to a buttercup but is early flowering in February, creating splashes of gold around the garden.

“The range of plants shows botanical gardening at its best… they temper prejudice, widen knowledge and give intense visual and horticultural pleasure.”

Many of the original tree plantings remain and provide essential structure within the Winter Garden. The yew hedging along the back of the garden provides an evergreen backdrop to the tapestry of colour within its boundaries and helps trap the scents from the shrubs within. Specimen trees include Prunus incisa ‘February Pink’, the snake-bark maple Acer capillipes, the peeling bark of the paper-bark maple Acer griseum and pink, buff and yellow bark of Betula utilis subsp. albo sinensis– all add texture as well as winter colour. Other popular and long-flowering stalworts of the garden include the wintersweet, Chimonanthus praecox ‘Grandiflorus’, the yellow racemes from a variety of mahonia species and the unusual Colletia paradoxa found at the back of the garden. This is named at CUBG as the ‘Spitfire shrub’ as in silhouette the little spines look like the shape of a spitfire. It is grown for its unusual form and structure and almond scented flowers in early winter.

An eye to the future – the playful side of the Winter Garden adding a new dimension as life begins at 40:

Pete and David are always trying and testing new combinations.  At the end of autumn 2018, they removed some old conifer trees at the garden’s eastern end to create a newly planted area for the Garden’s 40th year. This includes a drift of the dwarf mountain pine, Pinus mugo ‘Ophir’, one of many conifers coming back into gardening fashion. This is interplanted with Bergenia x smithii ‘Sunningdale’ and snowdrops. The tall grass Miscanthus ‘Septemberrot’ has been chosen as part of this new scheme for its foliage which it holds well into the winter. They are also planning a bigger play on the use of structure using plants that have not been considered before, such as Agastache nepetoides – “these have strong stems and look really good backlit from the sun and last year survived the Beast from the East” explains Pete, and Sedum ‘Herbstfreude’ – “their dead flower heads provide beautiful silhouettes which we leave on for structure and look great with frost on.” Further interest is added by interplanting with stems of teasels.

This year they have also added the deciduous shrub Edgeworthia chrysantha ‘Grandiflora’ which has a reputation for being tricky to cultivate but provides beautiful fragrant yellow flowers in late winter. “And conifers are making a comeback,” explains David, as they are experimenting with some new conifers – Cryptomeria japonica ‘Elegans Compacta’ and Microbiota decussata – both which turn bronze in winter.

The Winter Garden is open every day from 10am December – late March.

We hope that visitors will enjoy the Winter Garden in its 40th year.

Free 1 hour tours of the Winter Garden will take place every Sunday through January and February on a first come first served basis.
Visitors are requested to sign up at Brookside Gate on the day, numbers are limited.  Tours leave from Glasshouse Terrace at 2.30 pm. Normal Garden admission applies. 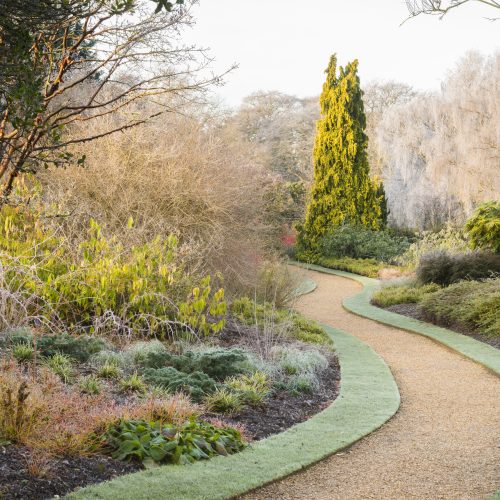 Key characteristics of the Winter Garden

A masterclass of colour, scent, structure and flower. 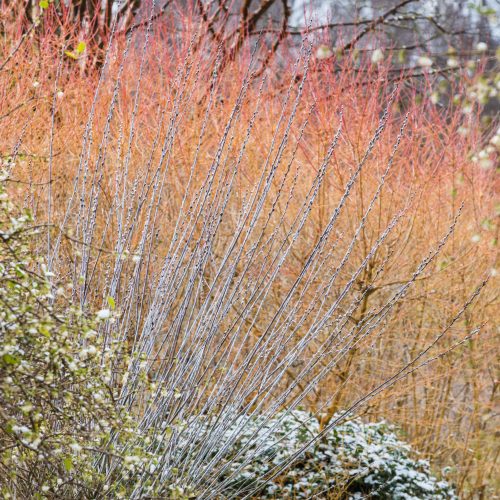 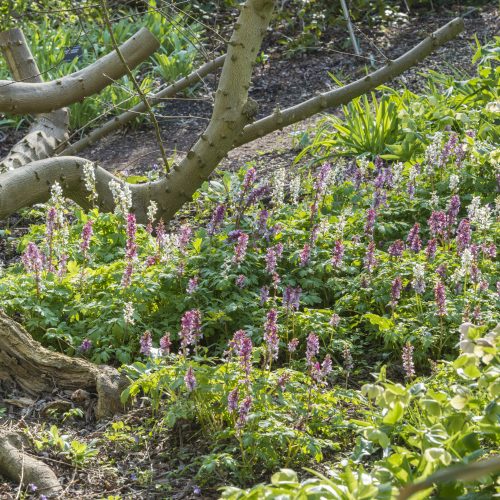