Flowering in spring, the Saucer Magnolia (a hybrid between M. denudata and M. liliiflora) produces a succession of large flowers, which open before the leaves.  Named after the Professor of Botany at Montpellier, Pierre Magnol (1638–1715), the genus Magnolia includes approximately 125 species from Asia and America.

Plants belonging to the Magnolia family (Magnoliaceae) appear in fossils dating back around 95 million years, which predates the evolution of bees. The flowers are thought to have evolved to encourage pollination by beetles, while the seeds of nearly all species within the family are fleshy, brightly coloured, and distributed by birds. The exceptions are the two species within the genus Liriodendron (Tulip Tree), whose flowers form ‘samaras’: structures where the seed is attached to a flattened wing of tissue. Examples of samaras in other tree families include Ash (Oleaceae) and Sycamore (Sapindaceae). 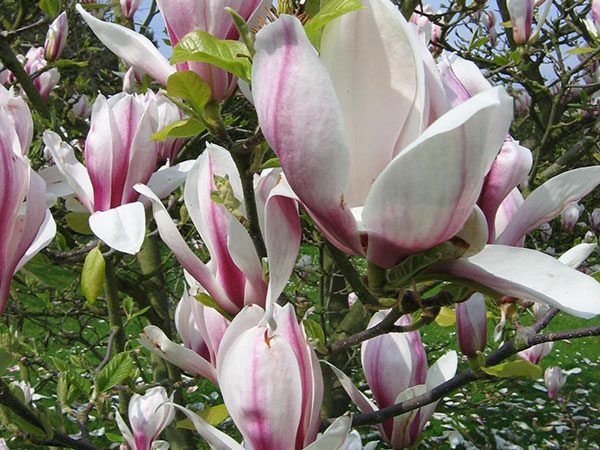