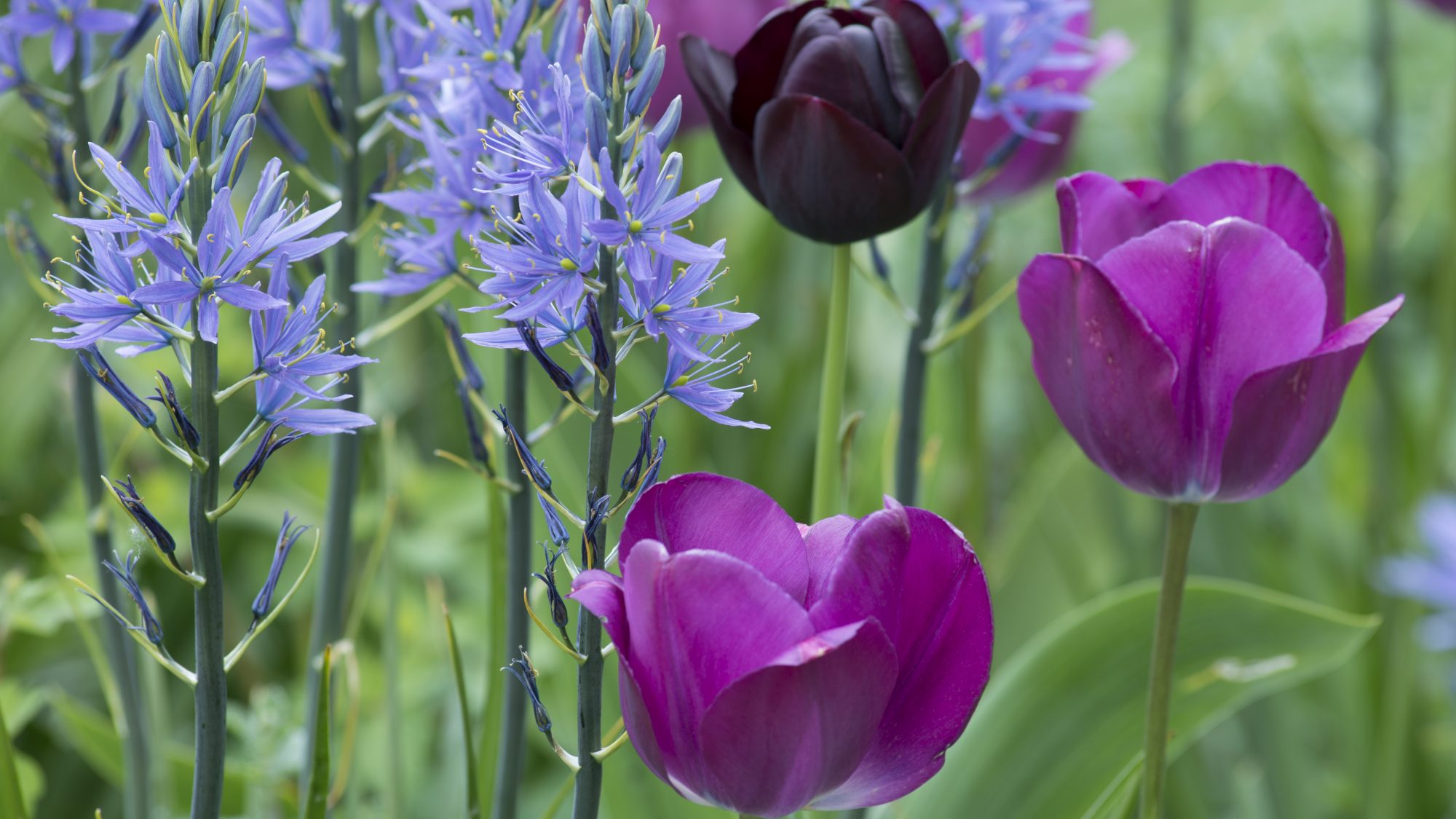 Iridescent flowers are never as dramatically rainbow-coloured as iridescent beetles, birds or fish, but their petals produce the perfect signal for bees, according to a new study published by Professor Glover and her colleagues in Current Biology on 25 February 2016

Bees buzzing around a garden, looking for nectar, need to be able to spot flower petals and recognise which coloured flowers are full of food for them. Professor Beverley Glover, who is also Head of the Evolution and Development Group at the University of Cambridge’s Department of Plant Sciences and Dr Heather Whitney from the University of Bristol found that iridescence – the shiny, colour-shifting effect seen on soap bubbles – makes flower petals more obvious to bees, but that too much iridescence confuses bees’ ability to distinguish colours.

Whitney, Glover and their colleagues found that flowers use more subtle, or imperfect, iridescence on their petals, which doesn’t interfere with the bees’ ability to distinguish subtly different colours, such as different shades of purple. Perfect iridescence, for example as found on the back of a CD, would make it more difficult for bees to distinguish between subtle colour variations and cause them to make mistakes in their flower choices.

“In 2009 we showed that some flowers can be iridescent and that bees can see that iridescence, but since then we have wondered why floral iridescence is so much less striking than other examples of iridescence in nature,” says Glover. “We have now discovered that floral iridescence is a trade-off that makes flower detection by bumblebees easier, but won’t interfere with their ability to recognise different colours.”

Bees use ‘search images’, based on previously-visited flowers, to remember which coloured flowers are a good source of nectar.

“On each foraging trip a bee will usually retain a single search image of a particular type of flower,” explains Glover, “so if they find a blue flower that is rich in nectar, they will then visit more blue flowers on that trip rather than hopping between different colours. If you watch a bee on a lavender plant, for example, you’ll see it visit lots of lavender flowers and then fly away – it won’t usually move from a lavender flower to a yellow or red flower.”

This colour recognition is vital for both the bees and the plants, which rely on the bees to pollinate them. If petals were perfectly iridescent, then bees could struggle to identify and recognise which colours are worthwhile visiting for nectar – instead, flowers have developed an iridescence signal that allows them to talk to bees in their own visual language.

When they tested how fast the bees were to find nectar-rich flowers amongst other, similarly-coloured flowers, they found that perfect iridescence impeded the bees’ ability to distinguish between the flowers – the bees were often confused and visited the similarly-coloured flowers that contained no nectar. However, imperfect iridescence, found on natural petals, didn’t interfere with this ability, and the bees were able to successfully locate the correct flowers that were full of nectar.

“Bees are careful shoppers in the floral supermarket, and floral advertising has to tread a fine line between dazzling its customers and being recognisable,” says Lars Chittka from Queen Mary University of London, another co-author of the study.

“To our eyes most iridescent flowers don’t look particularly striking, and we had wondered whether this is simply because flowers aren’t very good at producing iridescence,” says Glover. “But we are not the intended target – bees are, and they see the world differently from humans.”

“There are lots of optical effects in nature that we don’t yet understand. We tend to assume that colour is used for either camouflage or sexual signalling, but we are finding out that animals and plants have a lot more to say to the world and to each other.”
Glover and her colleagues are now working towards developing real flowers that vary in their amount of iridescence so that they can examine how bees interact with them.

“The diffraction grating that the flowers produce is not as perfectly regular as those we can produce on things like CDs, but this ‘advantageous imperfection’ appears to benefit the flower-bee interaction,” says Whitney.

The Botanic Garden’s Bee Borders in front of the Glasshouse Range are home to many different types of flowers which attract bees . These borders are used for research and teaching purposes at the University of Cambridge as well as informing the visiting public about bees and the plants which attract them. They are a hive of nectar and pollen collecting activity from spring through to September.

The text in this work was originally published on the Cambridge University website. It is licensed under a Creative Commons Attribution 4.0 International License – See more by clicking on the left-hand link.