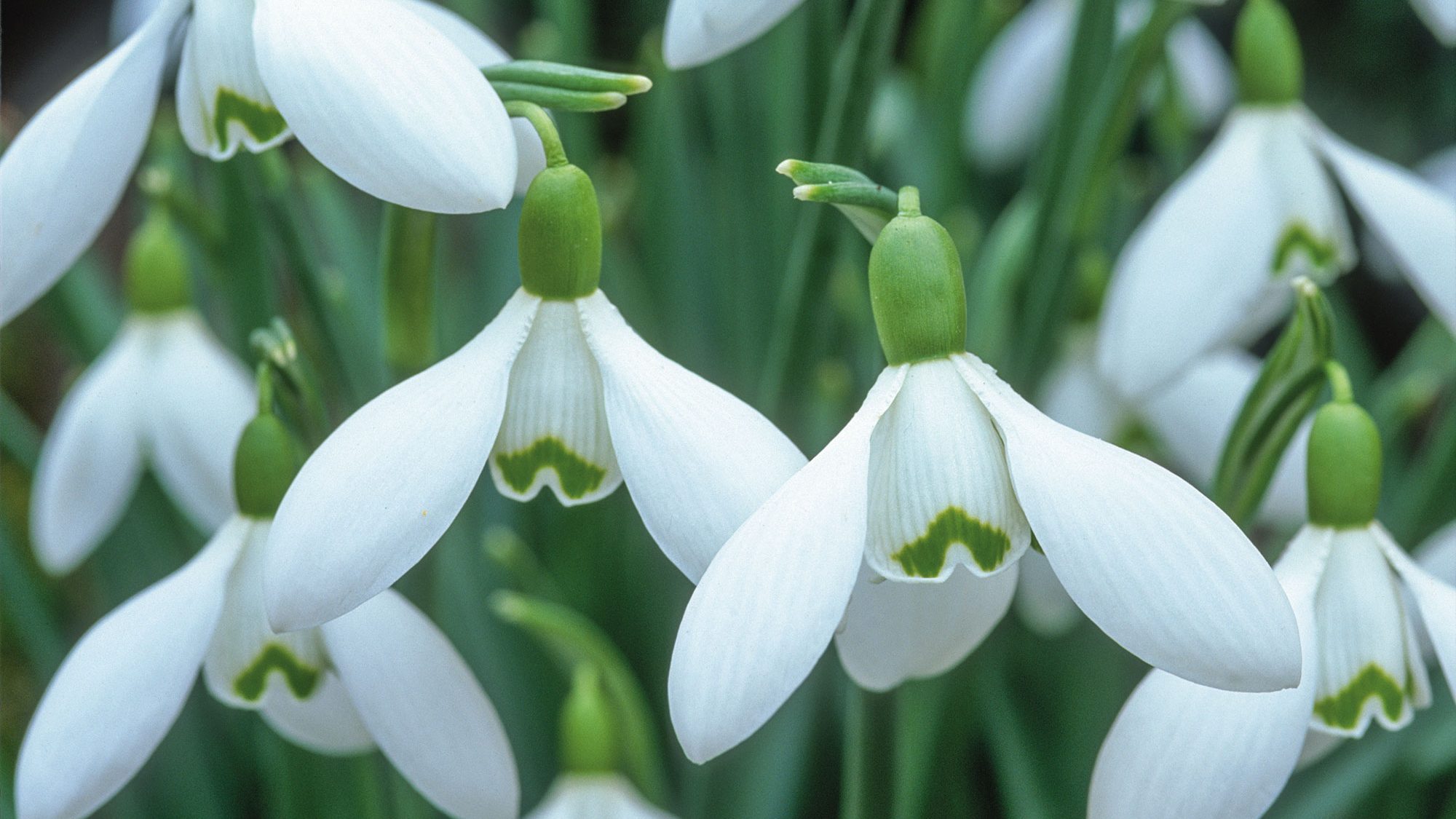 There are 44 different species, varieties, cultivars and hybrids of snowdrop (Galanthus) to see here at the Garden.

If you’re visiting the Garden in the spring, collect a Snowdrops Trail leaflet from our ticket offices and enjoy our Snowdrop walking route. Along the way, you will find information boards highlighting some fascinating facts about Snowdrops. You’ll also discover which species are growing in the Garden on the last page of the leaflet.

Look closely to discover the wide variation of flower and leaf shapes in snowdrops.

Not all snowdrops are the same!
There are about 20 known species of snowdrop, native to Europe and the Middle East. Probably the most common species are Galanthus nivalis, Galanthus elwesii and Galanthus plicatus. Many hybrid snowdrops have arisen from just these three species.

Telling the species apart
The best way to tell these three species apart is to examine the leaf. G. elwesii has a rounded (‘supervolute’) leaf base, while G. plicatus leaves have a folded (‘plicate’) lip along the edge. The leaves of G. nivalis are pressed flat (‘applanate’) at the base. Look for plant labels as you explore the Garden, and see if you can spot the subtle differences as you come across each species.

Flower shapes and patterns
The rapid growth in named cultivars of snowdrops has provided us with a seemingly never-ending supply of different flower shapes and sizes. Look closely at the flowers of the snowdrops we have here in the Garden to see the huge variety of features – you will begin to see why these popular plants are so sought after and collected.

What's in a name?

From ‘Grumpy’ to ‘Octopussy’, there are hundreds of named snowdrop cultivars. Their names often reflect floral features, or special people or places.

Wendy and the Wandlebury yellows
A clump of snowdrops with yellow colouring was found in the early 1970s at Wandlebury, a local nature reserve, by the then warden Bill Clark. He named it ‘Wendy’s Gold’, after his wife. Most of the bulbs were sold to a Dutch company, who planned to market them, but all were lost to disease. Luckily, in the long tradition of horticulturists sharing plants, Bill had given a small stock of the bulbs to Ray Hunter here at the Garden. All stock of it is descended from those few plants.

Kite and Merlin
Kite is one of the few twin-headed snowdrops – but not reliably so, and the second flower is sometimes a bit stunted. Merlin is striking for its all green inner segments. It was raised along with another legend-themed cultivar, ‘Robin Hood’, named by James Allen in the 1890s; it is thought to be a hybrid of Galanthus elwesii and Galanthus plicatus.

Anglesey Abbey
Known for its annual displays, Anglesey Abbey has a long association with snowdrops. The tall fully double snowdrop Galanthus ‘Richard Ayres’ is thought to have originally occurred there, and was named for a former head gardener at the Abbey.

These and many more snowdrop stories are taken from A Monograph of Cultivated Galanthus (Bishop, Davis & Grimshaw 2001). (Note that we do not currently have the cultivar pictured, Galanthus ‘Grumpy’, in our collection.)

Anti-freeze and leaves of steel
In cold spells you will often see snowdrops collapse to the ground, only to resurrect themselves once the temperature rises. Plant tissue is often damaged or killed by ice crystals forming in the cells during freezing. However, many plants, including snowdrops, have ‘anti-freeze’ proteins that help inhibit ice crystals forming and limit their growth, protecting the plant cells from damage. Snowdrop leaves have specially hardened tips to help them break through frozen soil. These are essential qualities for plants that grow and flower at the end of winter.

Rapid petal action
The outer segments of snowdrops move in response to changes in temperature. When air temperatures are above 10°C, pollinating insects such as bees are likely to be flying, and the petals move upwards and outwards, opening the flower for them.

Plants in medicines
The alkaloid Galantamine, used to treat Alzheimer’s disease, was first isolated from the snowdrop Galanthus woronowii. Galantamine is also found in other members of the Amaryllis plant family (Amaryllidaceae), such as Narcissus and Leucojum. Today, Galantamine is mainly produced from plants: chemical synthesis is possible, but it is difficult and expensive.

Despite their delicate appearance, snowdrops are generally tough little plants which are quite easy to grow.

Soil and location
Snowdrops are woodland plants that emerge early, when deciduous woodland trees still have leafless branches. To grow well in your garden they need to be planted where they will get good light early in the year – not under evergreen shrubs! Deciduous woodland soils are generally well drained and rich in leaf mould and organic matter. If your soil is very poor and thin, add organic matter regularly to enrich it, and if it is heavy and doesn’t drain well, add grit to improve it.

Planting
Source your bulbs from reputable suppliers and plant them in the autumn. Take care to plant them as soon as you buy them, as they are prone to dry out. Plants growing in pots (or ‘in the green’) can be bought and planted out in the spring.

Divide and spread
Regular lifting and dividing of snowdrops will encourage them to thrive, and is the easiest way to propagate them. Once the flowers have begun to fade, dig up the whole clump, shake off the soil and tease the bulbs apart with your hands. Re-plant half the clump in the same location and add smaller groups of three to five bulbs in random groups surrounding this central clump. Take care to replant them to the same depth by looking for the soil line on the stems.

Fair maids of the snow

Snowdrops are often seen as heralds of Spring, and as symbols of hope, representing friendship in adversity. But they also have associations with sorrow and consolation.

Linnaeus’s milk flower
We think of Galanthus nivalis, our common snowdrop, as being native to the UK. But it is likely they were introduced here in the late 1500s and then became naturalised over time. Carl Linnaeus first described the genus Galanthus, taking the name from the Greek ‘gala’ meaning milk and ‘anthos’ meaning flower. The species name ‘nivalis’ means ‘of the snow’.

Candlemas flower
Snowdrops can symbolise chastity, consolation, death, friendship in adversity, hope and purity. Christians dedicated them to the Virgin Mary, scattering the flowers on altars on Candlemas Day (2 February) and bringing bunches into churches as symbols of purity. As a result, churchyards are often full of snowdrops, probably planted there to supply flowers for these rituals.

This research shows that the average flowering date of the common snowdrop has moved from around the end of February in the 1950s to early January in the 1990s.