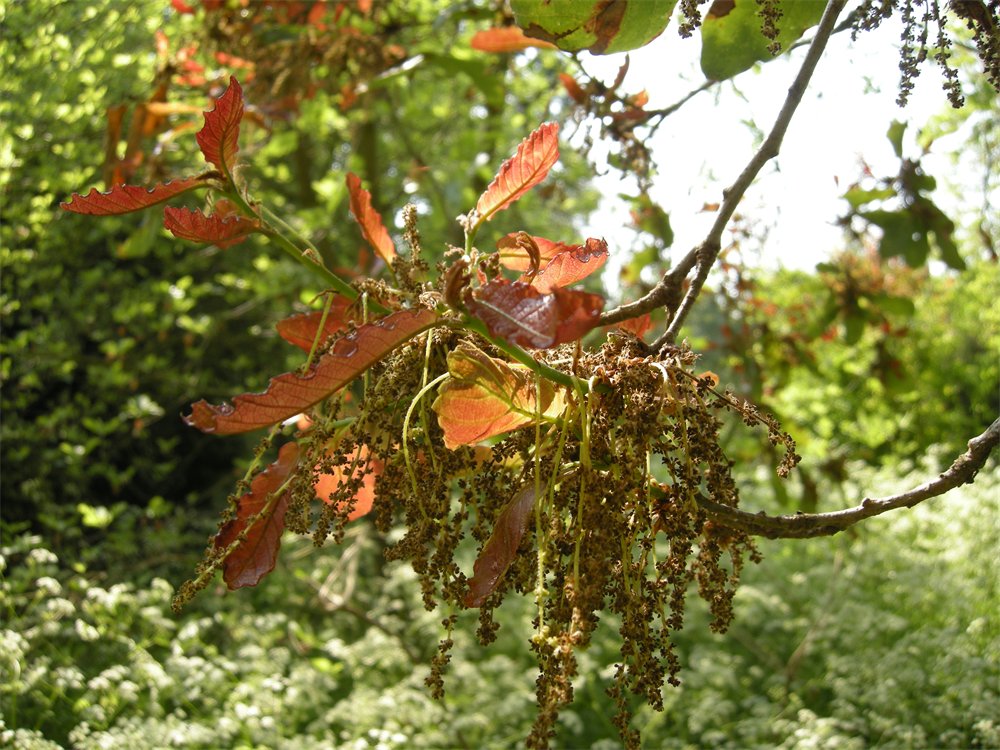 The exact origin and planting of this fine hybrid Oak are unknown. It appears to have originated, along with a tree growing at the Royal Botanic Gardens, Kew, from the nursery of Messrs Smith of Worcester between 1873 and 1875. It has been named and renamed as botanists disagreed over its parentage. It is most widely thought to be a hybrid of Quercus rugosa, an evergreen species from USA, Mexico and Central America, and the British native Quercus robur.

Each May it is a superb sight when the leathery over-wintered leaves are finally shed, the new coppery-red foliage unfurls, and the tree is festooned with tassled bunches of golden-yellow catkins. Despite the low average annual rainfall and the light alluvial soil of Cambridge, our tree has made a fine specimen. It was recorded by Richard Lynch (Curator from1879-1919) as 11.7m high with a spread of 11.7m in 1910. In that same year, Henry Elwes and Augustine Henry published the first botanical description of it in The Trees of Great Britain and Ireland, noting that the specimen at the Cambridge Botanic Garden was the finest in the country. It is not clear when, and by whom, the common name of ‘the Cambridge Oak’ was first coined, but we assume it is in recognition of this well-known and magnificent specimen.

Today the Garden’s Cambridge Oak has attained a height of 16.7 m and a crown spread of 19.5m (measured 2005). However it is not the champion tree in the British Isles, this accolade going to a tree at Petworth Park, Sussex which is over 20m high. For the last few years, our specimen has had fruiting bodies of a butt-decaying fungus appear on the trunk each autumn, which indicate decline of this tree. A young replacement tree, grafted from the original in 1991, is planted near the Terrace Garden and commemorates the garden’s 175th Anniversary, in 2021, on its current site.