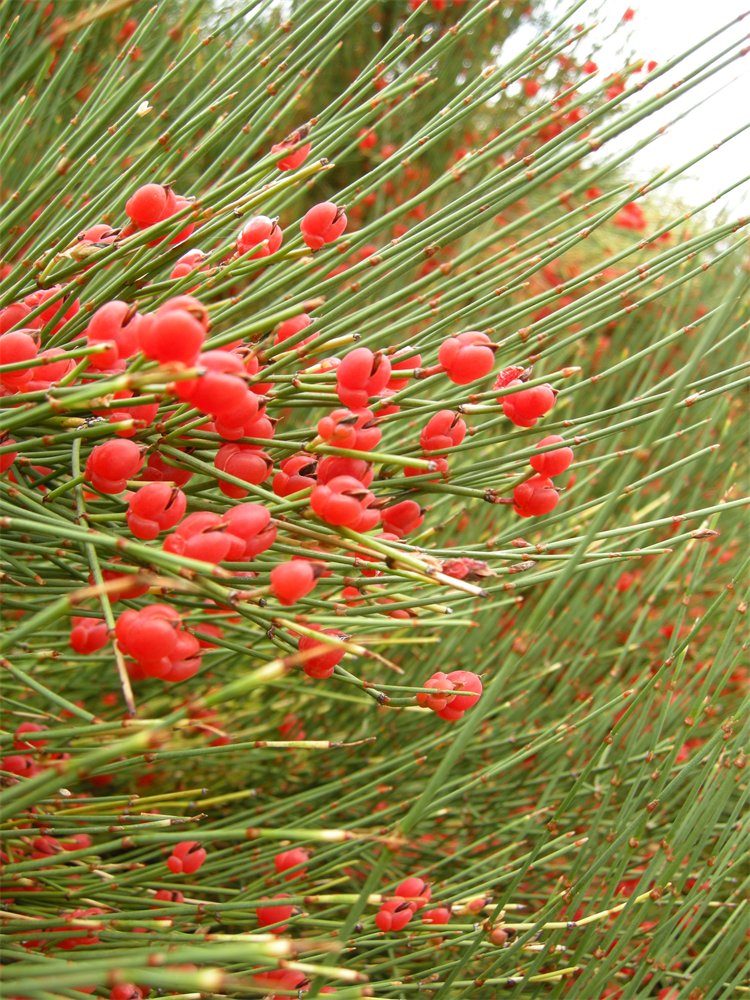 The slender, leafless almost rush-like stems of these shrubs makes the Ephedra collection, perhaps, one of the most enigmatic in the Garden. A group of about 40 species found from southern Europe, North Africa to Asia as well as the mountains of North and South America, Ephedra are typically plants of dry and desert regions. Whilst few may be familiar with Ephedra, it is a medicinal plant from which the drug Ephedrine is derived, a common constituent in decongestant sprays. Its value in treating breathing disorders is reflected by its long history of cultivation in China, estimated at over 5000 years. Ephedra, while rarely seen, can make an unusual, drought-tolerant addition to the garden.

For botanists, Ephedra is of great interest, as the genus forms a linking group between conifers and flowering plants. This is reflected in the Garden, as the main planting of Ephedra, not far from the Fountain, is positioned to be surrounded by conifers in the Old Pinetum. The European shrubby horsetail, Ephedra distachya grows here, the common name again alluding to the similarity in the form of the stems with horsetails (Equisetum). It has been cultivated throughout southern and eastern Europe since the 16th century for medicinal purposes.

Here can be found a range of species which, on first glance, might look similar but with closer observation, can be seen to differ in habit, stem and the form of the scale-like leaves. The leafless stems with scale-like leaves so typical of Ephedra are not unique to this group, but are also found in other plants such as Polygonum scoparium, which is planted in the same bed. Collectively, these are known as ‘switch-plants’. The reduction of leaves to small, scale-like structures dramatically reduces water loss, an adaptation found in many unrelated plants growing in arid land conditions. Photosynthesis (the conversion of carbon dioxode to sugars using the sun’s energy) usually takes place in the leaves but in switch-plants this is undertaken in the green stems.

Ephedra produce small, cone-like reproductive structures followed by berry-like fruits, which are usually bright red or orange in colour. An ususual coloured form can be found in the collection, Ephedra americana var. andina, from Chile which bears white rather than the normal red berries. This is one of our oldest accessions at the Garden, dating from 1898, and so unusual is this colour form that it was highlighted in Curtis’s Botanical Magazine.

Perhaps the best and most spectacular specimen of Ephedra in the Garden can be found adjacent to the Limestone Rock Garden, along Henslow’s Walk. This specimen of Ephedra major subsp procera illustrates the typical spreading and suckering habit of the genus, and this plant now covers many square metres. Buried in the centre is a seat, a wonderful place to sit almost hidden from all those around. In late summer the plant is spectacular with red berries and the webs of spiders.

In contrast, on the other side of the lake in the Asian section of the Limestone Rock Garden, can be found the dwarf shrub, Ephedra gerardiana, collected by Garden staff in the Pakistan Himalaya.